Freeland: “It will be a difficult time for everyone” 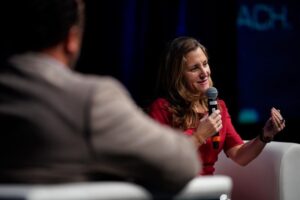 TORONTO – “It will be a difficult period for the Canadian economy”. Federal Minister of Finance, Chrystia Freeland (in the pic above, from her Facebook page), issued a warning: the next few months will not be good as the Bank of Canada’s recent rate hikes to tame (according to the bank itself) skyrocketing inflation will increase borrowing costs for businesses and consumers, which will send shockwaves throughout the economy, Freeland said, effectively echoing a concept that many economists have been arguing for months.

Speaking Wednesday at an automotive industry conference in Windsor, Ontario, the minister said that “businesses will no longer be booming, our unemployment rate will no longer be at an all-time low and it will be in both Canada and the United States, and in large and small economies around the world “.

The Bank of Canada – like other central banks, including the US – has aggressively hiked rates this year to provide price stability and meet the 2% inflation target. A strategy, so far, unsuccessful, given the results: as we wrote in yesterday’s article (Canada: inflation falls, but prices rise), Statistics Canada found that the consumer price index (CPI) increased by 6.9% on an annual basis in September, resulting only in slightly less than the 7% increase recorded the previous month. A decline due exclusively to the stabilization of energy costs. So much so that prices continue to fly: food costs 11.45 more than last year. A level never reached in 41 years.

And as Bank of Canada prepares to announce yet another rate hike next week, Freeland says the government won’t be able to help everyone ride the inflationary wave. “We cannot compensate every single Canadian for all the costs of inflation caused by the global pandemic and Putin’s invasion of Ukraine” said the minister, but she promised “relief” for the poorest Canadians. In fact, Freeland spoke of the approval of the C-30 bill, to temporarily double the GST credit paid to low-income families. Government estimates say this bill will give eligible childless individuals an extra $ 234 this year, while couples with two children will receive an extra $ 467 to offset the increased costs. Another bill, the C-31, would provide rent relief and give grants to parents to cover the cost of their children’s dental care costs. And then social programs such as employment insurance (EI) will be available to help people who lose their jobs due to the economic crisis.

Aid, therefore, will be there but “we will not flood the country with emergency subsidies because it would be like pouring fuel on the inflationary flames and inflation would last longer. With more money in circulation, there would be more demand for a limited supply of goods and services, which would only push prices higher” Freeland said, adding: ” We are charting a balanced economic path. We are acting compassionately but we are very careful that our measures are targeted”.

But the opposition attacks. According to conservative leader Pierre Poilievre, it was not only the supply chain disruptions linked to the pandemic and the war that caused the increase in inflation in Canada in the first place, but also the “staggering” public spending in response to the pandemic. According to the Conservative leader, in fact, the liberal federal government’s “half-trillion-dollar inflation deficits” in the past two fiscal years are responsible for the highest costs, and “Justin Trudeau has done nothing for the vast majority of troubled families. Even the small minority that receives support will find themselves devoured by rising inflation” said Poilievre, citing a recent report by the RBC – Royal Bank, according to which the average family will lose $ 3,000 of purchasing power yearly due to rising prices and interest rates. Poilievre therefore called on the government to eliminate planned increases related to the federal carbon tax, a “triple tax” that will raise food prices because it will impose additional costs on all parts of the supply chain.

Faced with criticism from the Conservatives, Freeland countered that the federal government will continue to tighten its belts in the coming months so that Ottawa does not inadvertently drive inflation. “Canadians are cutting costs and so is our government. We will do our part not to make inflation worse and more lasting.”