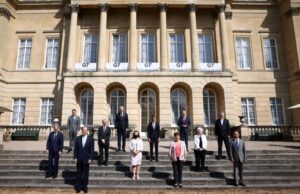 TORONTO – A global minimum corporate tax rate of at least 15 percent but without giving up the new taxes provided for the tech giants. Canada welcomes the agreement reached at the G7 but at the same time, through Finance Minister Chrystia Freeland, reiterates that the plan signed at the weekend will not change Ottawa’s plans, which from January 2022 will impose a new tax on big tech buddies. These measures, which will enter into force next year, are already present in the legislation in force of other states, such as Italy, Great Britain and France. Freeland added that countries will have to amend their legislation in the future when the transition to the new global taxation system happens.

“We’ve shown today that it is possible to end the global race to the bottom on taxation and this world’s leading liberal democracies are able to work together in the common interest,” Freeland said.

“Multinational companies need to pay their fair share of taxes. Jurisdiction shopping allows them to avoid doing that.”

“I greet with great satisfaction the agreement on multinational taxation reached today in London by the G7 finance ministers”, said Italian Prime Minister Mario Draghi. “It is a historic step towards greater equity and social justice for citizens.” The deal is a success for US President Joe Biden, who had relaunched the proposal in recent weeks. The agreement reached at the G7 meeting in London “is a starting point. In the coming months we will fight to be as high as possible. The battle will continue at the G20, at the OECD but today a historic stage has been reached,” said French Economy Minister Bruno Le Maire at the end of the G7. For the first time in decades, Le Maire adds, “the G7 Member States are capable of setting rules for the 21st century international system. An agreement of which we can be proud. We have been committed to fair digital taxation and minimum corporate taxation for 4 years. Here we go. There will be a tax on the digital giants and there will be a minimum tax on corporate taxation to avoid tax evasion and optimization.” For the Minister for Economic Affairs French in short, the one found in London at the G7 “is an ambitious agreement”.

“G7 finance ministers today made a significant and unprecedented commitment that provides an extraordinary momentum towards achieving a global minimum tax rate at a rate of at least 15%. That global minimum tax will end the race to the bottom in corporate taxation and ensure fairness for the middle class and workers in the United States and around the world”, said Us Treasury Secretary Janet Yellen in a tweet commenting on the deal reached at the G7. The global minimum tax, Yellen adds, “will also help the global economy thrive, levelling the playing field for businesses and encouraging countries to compete on a positive basis, such as education and training our workforce and investment in research, development, and infrastructure.”