Do you feel slow, tired and overweight because with this pandemic you don’t do much exercise and you don’t stop eating the delicious dishes that your grandmother prepares for you? The same thing happens to him… or happened to Vladimir Guerrero Jr., the great Dominican-Canadian player for the Blue Jays.

The 2020 season was not over yet when he realized what he had to do. He was overweight, as he himself has admitted. And the effects on the field were obvious: The Toronto Blue Jays moved him across the diamond because he was struggling to score and hit low balls, and he got tired after fielding 20 rounds in practice.

So the 22-year-old baseball player decided to seek help. He called Junior Rodríguez, a personal trainer and performance specialist in the Dominican Republic, with a background in nutrition. His reputation for getting the most out of baseball players was enough to draw Guerrero close.

But before deciding to move in to coach him, Rodriguez needed to know if “Vladi,” the Blue Jays’ budding star, was all in. And really, Guerrero was ready.

“One day, I woke up, got out of bed, looked in the mirror and said: ‘Enough is enough,'” Guerrero has said, on different occasions. Guerrero got rid of 20 kilograms that were left over from his 1.88-meter-tall body structure and was left with a weight of 110 kilos. These days, he flies around the bases, splits to catch low pitches at first, feels full of life, and his hitting performance is one of the best. 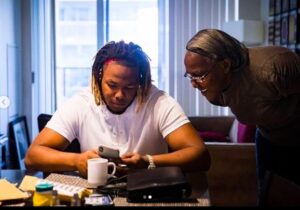 He continues to eat his grandmother Altagracia Alvino’s homemade food. After all, who could deny it, but in smaller portions and mixed in with healthier options and eat fewer late-night meals.

As he did with his son at one point, the great player and Hall of Famer Vladimir Guerrero Sr., Altagracia moved to Toronto to cook Dominican food and take care this time of his grandson … and his grandson’s friends . Well, “Grandma” – as they all say – not only packs lunch for Guerrero, but also for other members of the Blue Jays team.

With her cookbook in mind, Abuela now cooks for Guerrero in Florida, where the team is, but yes … without so much fat or carbohydrates.

Work, diet and teamwork have paid off. So there are no excuses not to get in shape.