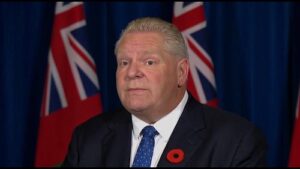 TORONTO – Although non-teaching staff at Ontario schools have returned to work and negotiations have just resumed, the agreement between the government and CUPE remains a mirage. The parties seem to be still far apart on some key issues. The Canadian Union of Public Employees (CUPE), which has more than 50,000 members among the education support staff, says it will not accept a “two-tier offer” from the province: an uneven wage increase has been reported as part of the latest offer from the Ford government “We have been clear, an agreement will be made with a substantial lump sum increase – reads a statement released yesterday by the bargaining committee – such an offer would not be  up to what you workers need to ratify an agreement.”

According to a government source, the latest proposal calls for an annual increase of 3.5% for the lowest paid workers and an increase closer to 2% for the workers with the highest wages. Those numbers are higher than the 2.5% and 1.5% payroll increase in the four-year Bill 28 contract that the province is preparing to repeal on Monday.

For its part, the CUPE, says it has not received what is indicated as the last offer of the government and stresses that if it was really the leaked one it would not advise its members to accept. The government, meanwhile, while contesting the increases disclosed by the well-informed source, does not pronounce. “The mediator asked me not to talk about it,” Doug Ford said today when he was told that the union would not accept such a deal.

What the province is trying to do right now, according to the source close to the government, is to cool the incandescent climate that led to last Friday’s strike. But Prime Minister Doug Ford, after showing himself open to dialogue and promising to revoke the bone of contention law with CUPE on Tuesday, today appeared reluctant to abandon the idea of an offer with two different increases. “We will focus on low-paid workers, this is our goal – he said – I will be fair, I hope the union is too”.

What seems to worry Ford is that any agreement could have an impact on the contracts of teachers represented by four unions that are also negotiating with the government: “The increases for teachers could translate into tens of billions of dollars – he noted – I need to assess what repercussions they would have on the coffers of the Ontario government”.

The new round of negotiations is not at all easy. These days seem to be an apparent calm, a truce waiting to take up arms again. The union has already said it is ready, after giving five days’ notice, to strike again if the talks do not go in the desired direction.

Prime Minister Doug Ford, after trying to ease tensions and convincing striking CUPE members to return to work, seems to be adding fuel to the fire again. Today he said he believed the two-day strike by education workers amid strained contract negotiations was “much more dangerous” than the much-contested Bill 28. “You know what’s worse than Section 33? It’s the threat of strike, shutting down Ontario’s economy, keeping parents at home, leaving kids at home, keeping grandparents home because kids are dumped on them, that’s so much more dangerous than Section 33,” Ford said.

The hope of renewing the new contract that expired on 31 August is now in the negotiations, but a great deal of goodwill is needed. Wall against wall will lead nowhere.