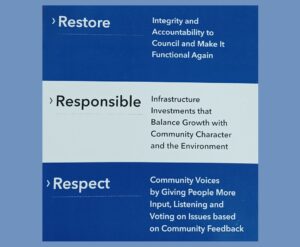 TORONTO – If one did not know it, the Municipal Democracy Index (MDI) confirms that our democratic institutions at the local level are crying out for serious reform, if not an injection of civic commitment. In 2021, out of a total of 150 possible points on the MDI scale, only eight (8) municipalities of the thirty-two (32) measured in Ontario received a passing grade of 75 or better. Neither Toronto nor Vaughan was among that acceptable group.

MDI is a joint project of the Marshall Strategy Group and Unlock Democracy Canada. They measured the strength of democracy based on four basic criteria that included transparency/accountability, citizen engagement, voter turn-out and integrity. Brampton and Richmond Hill ranked 31st and 32nd – dead last!

Incumbents should be worried. The sense that the public should “throw the bums out” is beginning to develop a head of steam. Some candidates have begun to come to the Corriere with their concerns and solutions.

It’s not surprising, in Richmond Hill, there are over 5,000 inhabitants who self-identify as Italian (2016 census). In Ward 5, for instance, one candidate, Richard Rupp (in the pic below), is proposing a plan based on the “3 Rs”: (1) Responsible infrastructure investments, because “Richmond Hill is “a mess”, (2) Respect for community voices and (3) Restoring integrity, accountability and functionality.

Some would say that it is ‘low hanging fruit’. Council is consumed with internecine squabbles resulting in a sea of complaints to the Integrity Commissioner and more. The current Councillor, Karen Cilevitz, found herself in serious legal problems for her questionable hiring practices when a former aide turned whistle-blower forced an investigation and Court appearance on fraud charges. Only a plea bargain on lesser charges saw her escape potential jail sentence. Rupp may be on the right track.

Over to the West part of the GTA, in Brampton (over 25,000 Italian inhabitants as of the 2016 census), City Council cannot possibly be functional if all the incumbents are re-elected. Council is already split between the pro-Mayor and anti-Mayor councillors. One Integrity Commissioner was summarily dismissed – she has initiated a lawsuit – her replacement comes with much baggage. A “whistleblower” who exposed alleged conflicts by the mayor during the Conservative leadership race has her own issues to explain. She is running to replace the mayor.

Not so fast, says, Bob Dosanjh Singh (in the pic below), another candidate for the mayoralty, to reword an old English saw, “too much smells in Denmark”. Singh, an activist and journalist says that, even though no one wants to name names, everyone “knows” who and what the problems are and why the solutions are not being applied. Anyone associated with the administration at the political or bureaucratic level is unfortunately operating under a cloud of negativity.

Singh says the first step is to establish objective and clear hiring practices. Successful candidates must have the authority to make changes and be held accountable. Second, we must address the transportation and traffic issues. He maintains that these are economic problems that “deter investments in our community and need attention urgently”.

Third, we must improve community safety. Hiring another four hundred police officers will help curb scofflaws, illegal behaviour and emerging street gangs. It is almost unproductive to plan for a new hospital we need or a university we want, he says, until Brampton solves these basic issues first.

Bob Singh is confident he is the candidate to take Brampton to where it should go: “Ours is a truly multi-ethnic, multi-lingual, multi-racial and multi religious community. The Italian Canadians are still numerous enough to provide some leadership in the transition. I’m here to ask for their assistance.”