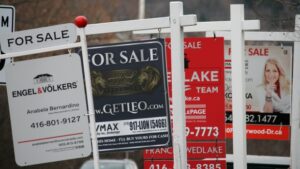 TORONTO – In March, Toronto saw a slight decline in the average selling price of homes. This is an element in contrast to the trend, since according to data from the Toronto Regional Real Estate Board (TRREB), in general the market warms up as spring approaches.

The Toronto Regional Real Estate Board says the average sale price of any type of property last month was $1.299 million. This marks a slight down from February, when an average property was sold for the record $1,334 million.

The latest data, released by the TREEB yesterday, comes on the heels of last month’s increase in bank of Canada’s interest rates of 25 basis points.

The central bank also warned that further rate hikes are likely as it seeks to reduce inflation to 5.7%, a 30-year high. This, in turn, will drive up the cost of borrowing and could eventually have an impact on the broader housing market. “Competition among home buyers in the GTA remains very strong in most neighborhoods, however, in the first quarter of 2022 we found a greater balance than last year. If this trend continues, it is possible that the pace of price growth may ease over the course of the year,” said Jason Mercer, Chief Market Analyst at TRREB in the press release accompanying the data.

Now, however, the latest data seems to suggest that a noteworthy change may have begun.

The approximately 11,000 real estate sales that took place in the month still represent the third most active March ever, but the decrease recorded stands at 30% compared to March 2021. Price lists also fell, but only by about 12%, which could indicate a greater balance in the market.

That said, for now the cheapness of the brick continues to crack despite the decline in demand. This was especially true when it came to some of the most affordable housing types, including semi-detached homes (prices up 26% year-on-year) and townhouses (25%).

The acceleration in prices was also particularly pronounced in the 905 region around Toronto, where the average selling price in all types of housing increased by nearly 27% year-over-year to $1.346 million.

John DiMichele, CEO of TREBB, said the latest numbers should remind us of the importance of policies aimed at increasing housing supply, rather than “trying to suppress demand”.”

A comment, this, which come in the wake of the increase in the tax for non-resident buyers decided by the Ford government as part of a broader plan to deal with the housing crisis “In the coming years population growth should be at or close to record levels. The demand for rental properties and housing will not disappear at all,” DiMichele warned.