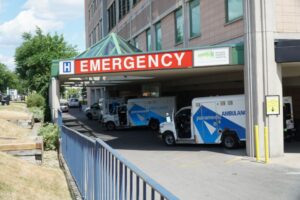 TORONTO – Nearly five million Canadians over the age of 12 in 2019 did not have access to a family doctor. This, according to the latest available data from Statistics Canada.

Rates of people living in Quebec, Alberta and Nova Scotia not being followed by a primary care physician increased significantly in 2019 compared to a previous survey in 2015, but all provinces reported that 10% or even higher percentage of their populations need a family doctor.

And now, according to the College of Family Physicians of Canada, these numbers have likely grown, as more and more family doctors across Canada have reduced the amount of patients, cut hours, or left family medicine altogether.

“All these factors have led to a domino effect throughout the Canadian healthcare system: patients who no longer have a doctor to receive primary care get sick more seriously,” said Katharine Smart, pediatrician and outgoing president of the Canadian Medical Association. This situation causes the less seriously ill to turn to emergency rooms that are already overcrowded, due to the growing shortage of health workers in alternative care facilities such as long-term care homes.”

Staff shortages and overburdened emergency rooms have led to a cascade of temporary closures from coast to coast – a phenomenon that consequently generates even greater pressure on emergency departments that remain open. “Much of the volume we’re seeing in the emergency room is related to the fact that many people now have to use emergency rooms as a place to access care,” Smart added.

In essence, the shortage of general practitioners contributes significantly to the unsustainable situation in emergency rooms.

And in the future of the country there does not seem to be an increase in medical graduates who choose to be a family doctor. In fact, medical students increasingly prefer to specialize in one of the branches of medicine.

Hospitals across the country are also grappling with an increasing number of patients occupying hospital beds but who should be transferred to alternative care environments, such as long-term care homes or should be able to receive home care.

The problems, in essence, are many, what seems clear is the so-called domino effect or a chain reaction that occurs when a small change is able to produce another in turn. If family doctors decrease, people turn to emergency rooms, if there are no beds available in nursing homes the sick remain hospitalized in hospital wards. Prime Minister Ford is trying to overcome this last problem with the controversial Bill 7 that would allow the transfer of the elderly from the hospital to nursing homes even without their consent.

Meanwhile, today Doug Ford has a closed-door conversation in Queen’s Park with Prime Minister Trudeau. Recently, the premier of Ontario reiterated the need for Ottawa to allocate more funds to solve the health crisis.