Healthcare in shambles, new sos of the premiers to Justin Trudeau 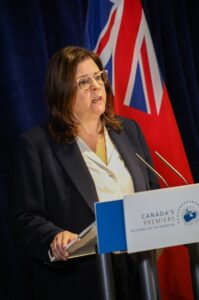 TORONTO – Public health is on its knees, but the federal government continues to look the other way despite the continuous “sos” from the provincial premiers: the latest, in chronological order, last Friday, when the governors of the Canadian provinces presented a joint appeal to Prime Minister Justin Trudeau, asking him to meet “urgently” to “find a deal” on health care funding ahead of the spring federal budget.

The premiers reiterated their position – repeated numerous times now, such as at the Vancouver summit just over a month ago – according to which Ottawa is not paying its fair share of health care costs. “It has been more than two years since premiers publicly outlined our proposal for a new funding partnership, but unfortunately, despite reassurances, we have received no meaningful response from the federal government” said Manitoba Premier Heather Stefanson (in the pic above, from her Twitter profile), the current president of the Federation Council which represents Canada’s 13 premiers. “There have been no federal proposals, no substantive meetings or dialogues, and no real progress. We need an urgent meeting of prime ministers to discuss these critical issues” she said.

But the deputy prime minister and finance minister, Chrystia Freeland, has once again “turned the omelette”, (not) responding indirectly to the premiers’ appeal: “We understand that Canadians are really worried, frustrated and scared, in many parts of the country, for the state of the health system, and we know that we must work together to make it better – Freeland told reporters during an event in Toronto on Friday – and, yes, that means some more investment, but it also means focusing on being confident that we will get the results Canadians rightly expect from us from those investments alone”. The provincial premiers were more concrete, asking without mincing words for an increase of 28 billion dollars to Canada Health Transfer, which should bring the federal contribution to health care costs from the current 22% to 35%.

Ontario Premier Doug Ford said the biggest problem in every part of the country was healthcare, as hospital emergency rooms struggle to cope with significant patient spikes, “thanks” to a triplet of infections from influenza, respiratory syncytial virus (RSV) and COVID-19. That’s why premiers want a meeting as early as possible in the new year, to ensure any deal on funding is included in Ottawa’s spring 2023 budget.

“Nothing should be more important to the prime minister than meeting the thirteen premier. That’s the bottom line,” Ford said. “It shouldn’t be that hard to sit down, have a conversation, and close a deal. That’s what we ask”.

For his part, Justin Trudeau had already replied – after the Vancouver summit – that throwing money into a “broken system” is not the answer, but rather the provinces must accept changes to improve the health services available to Canadians. The question arises itself: if the “system” is “broken”, how can it be fixed without money?