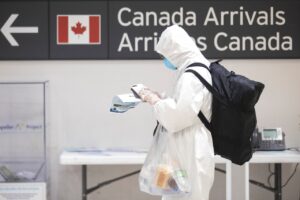 The federal agency for Transport Canada decided to show a strong hand to travellers who present false evidence of Covid-19 at international airports.

Two people who recently landed at Toronto Pearson International Airport will now have to pay fines of thousands of dollars for submitting false Covid-19 test results prior to departure.

In a press release, Transportation Canada said that a first passenger was fined $ 2,500 for presenting “tampered evidence” and then knowingly boarding a flight from the Dominican Republic to Toronto on February 8.

The second passenger, who flew from the United States to Toronto on April 3, was fined $ 6,500 for showing false evidence and also submitting a false statement to the airline about his health condition.

This is not the first time that Transport Canada has issued fines of this type to air passengers for non-compliance with regulations. Earlier this year, two passengers travelling to Canada from Mexico were fined $ 10,000 and $ 7,000, respectively, for presenting false evidence and lying in their statements.

In compliance with the Interim Civil Aviation Order regarding Covid-19, air travellers must submit a negative test result within 72 hours of boarding any flight to Canada.

“The government of Canada continues to advise Canadians that this is not the time to travel,” the agency has reiterated on several occasions. And it is that more than 5,000 people tested positive for Covid-19 after flying back to Canada since the mandatory quarantine hotels began at the end of February.

So far, variants of interest or concern have been identified in almost a third of those cases.

Data provided by the Public Health Agency of Canada lists 3,748 people who tested positive the day they returned despite having to show a negative Covid-19 test taken no more than three days before boarding their plane.