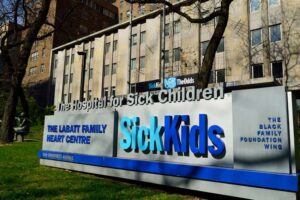 TORONTO – Health authorities around the world are working to clarify the causes of the increase in cases of fulminant hepatitis in previously healthy children, recorded in different parts of the world. The mysterious disease has also struck in Canada: at the Sick Kids Hospital in Toronto, over the course of six months, cases of severe acute hepatitis have been identified, the origin of which is unknown.

“SickKids is closely monitoring all cases of severe acute hepatitis and has reported seven cases, identified between October 1, 2021 and April 30, to Public Health Ontario – it remains to be seen whether this number represents an increase in cases of unknown origin compared to similar time periods in previous years or whether the cause of any of these cases will be confirmed to be a new clinical entity.”

Public Health Ontario defines cases as transaminitis, or inflammation of the liver, along with jaundice and gastrointestinal dysfunction in children up to 16 years old, without the presence of the known hepatitis A viruses up to hepatitis E. Other symptoms include lethargy, fever, dark urine, pale stools, loss of appetite and nausea. The infection is confirmed through blood, respiratory or stool tests.

The task of scientists is not the simplest. It has been difficult to distinguish these cases of hepatitis found in children from others because they often present with symptoms somewhat typical of Covid-19, and therefore the usual viruses that cause inflammation of the liver are not found in the blood. “The challenge with this appearance of new cases is represented by the fact that typical hepatitis viruses are not found in these children – said pediatrician Dina Kulik to CP24 – some of these children have tested positive for Covid-19, some have had previous documented Covid-19 infections and many children have tested positive for another typically benign virus known as adenovirus that typically does not cause hepatitis or very serious diseases”.

Finding out the cause of this disease is what scientists are trying to do. To date, among the main suspects there is the adenovirus or a family of viruses that infect children in particular, in which they usually cause mild illness with symptoms similar to colds, sometimes even gastrointestinal symptoms such as vomiting and diarrhea.

Among the hypotheses there is also a new variant of the coronovirus that triggers Covid because Sars Cov 2 has been detected in several cases. Any link with Covid-19 vaccines was instead excluded by the World Health Organization, as children in the United Kingdom, where most cases were detected, were not vaccinated.

Meanwhile, researchers in India and Israel have found data suggesting that a previous Covid-19 infection may be responsible for the infection.

The World Health Organization says it is now aware of 348 cases of unexplained hepatitis in children around the world, with one death reported and 17 liver transplants needed. “We are all engaged as a global community in research to be able to intervene earlier and prevent children from becoming seriously ill – said Kulik – we want to find out the cause so that we can prevent further cases”.

Meanwhile, Ontario’s Ministry of Health said it had required hospitals to notify all cases that fall under the definition. “We want to reassure Ontario residents that the risk of this severe acute hepatitis is low, however, the advice for anyone concerned about the symptoms experienced by their child is to contact a health care professional.”