House of Commons: tribute to Queen. Blanchet: “The history between the Crown and the Quebec nation is both thorny and cruel” 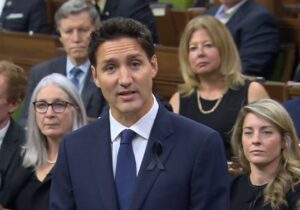 TORONTO – “Last week, Canada lost the only sovereign that most of us have ever known”: these are the words Prime Minister Justin Trudeau (in the pic above) said, today, during the official commemoration of Queen Elizabeth II, who passed away last week, in the House of Commons which met extraordinarily for the occasion.

Trudeau was the first MP to deliver a speech in honor of Canada’s longest-serving monarch, in front of MPs – many of them dressed in black – who returned to Ottawa earlier than expected to take part in what will be a “special session” of twice to commemorate the Queen and celebrate the accession to the throne of the new King: Charles III.

“It is important to take these moments, here in Parliament and across the country, to recognize the service and leadership that (the Queen) has given us,” said Trudeau, sharing memories of meeting Elizabeth and reflecting on her humor, her curiosity and the “wise advice” she dispensed. Trudeau then announced that he, along with Governor General Mary Simon, will travel to London for the funeral on Monday and bring with him former prime ministries and governors general.

Then Pierre Poilievre made his speech for the first time in his new role as leader of the Conservatives. “The Queen had a special in our hearts and we placed a special place in hers. She has more official periods spent here in Canada than in any other country except the UK,” she said, recalling Elizabeth’s visits. Poilievre then spoke of the “central role played by the Crown in Canadian democratic institutions. Parties and politicians come and go, the Crown resists,” he said, congratulating the new King.

“The Queen had a special place in our hearts, and we had a special place in hers. She spent a more official time here in Canada than in any other country, save the United Kingdom,” Poilievre said, going on to recall her numerous visits. The new opposition leader also spoke of the central role the Crown plays in Canada’s democratic institutions. “Parties and politicians come and go, the Crown endures,” he said, going on to congratulate the new King.

Instead, Bloc Quebecois leader Yves-Francois Blanchet (in the pic below) briefly offered his condolences, noting “the history between the Crown and the Quebec nation is both thorny and cruel. History separates us, but respect must come first and we have to distinguish institutions from the people, politics from sincere sadness. So we express our deepest condolences to the people of England”. 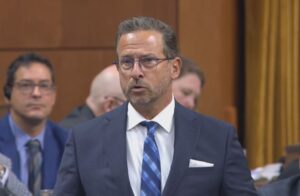 Once the initial ceremonial elements were completed on Thursday morning, he and his caucus left the House of Commons and are not expected to further take part.

“Queen Elizabeth II lead a remarkable life, one marked by history. Amid tremendous change, she was a figure of stability, providing a constant symbol to many,” said NDP Leader Jagmeet Singh. “Throughout her life Queen Elizabeth II used her platform to offer encouragement in difficult times. Most recently, during the pandemic.” Singh also said he hopes King Charles III meets the challenge of reconciliation that has been laid out by Indigenous leaders.

Also alluding to some of the tension within Canada when it comes to the role of the Crown, Green Party MP Mike Morrice said that while “many political questions” remain to be discussed, “today is not that day. Today, we honor and mourn a remarkable woman who loved this country and its citizens.”

Once the representatives of each side spoke, a moment of silence was held in the Chamber, with the MPs standing, hands folded in front of them and heads bowed.

A motion was then passed to send His Majesty (Charles III) a message from the Canadian House of Commons expressing profound closeness to the death of his beloved mother. “In this time of sorrow, we convey a sincere expression of our loyalty and our devotion.”

For the rest of the day, individual parliamentarians had the opportunity to stand up and speak but the number of those willing to do so was so high that it was decided to extend the session to tomorrow.

In the pics, from https://www.cpac.ca (click on the link to watch the whole video), Justin Trudeau and Yves-Francois Blanchet during their speeches