“I am sorry”: Toronto police chief on race-based data collection 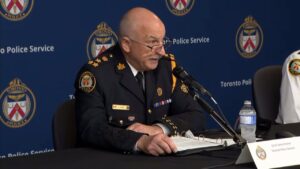 TORONTO – Chief James Ramer’s apology for Toronto Police conduct toward the black community was in the air. The blacks, after all, were waiting for them. What was a discordant note, in our opinion, is the reaction of Beverly Bain of the No Pride in Policing Coalition. “Yes, your police officers are responsible for their racism – she said – you are guilty. Chief Ramer, we don’t accept your apology.”

It was the report of more than 86,500 interactions Toronto Police had with citizens during 2020 that prompted Chief Ramer (in the pic above, from YouTube) to publicly apologize for what he called “systematic discrimination.” “As difficult as it is for me as head and for members of our command to come to terms with what our data says, I know it will be even harder for the black communities in Toronto who have been bringing their experiences to us for many years,” Ramer said at the press conference. It was a “mea culpa” on behalf of all the Toronto police, Ramer’s, a “mea culpa” that will certainly remain in history. “As chief of police, and on behalf of the force, I am sorry and I apologize unreservedly. This data will cause pain to many. Your concerns have deep roots that go beyond the publication of this report. We have to improve, we will do better,” he said.

Compared to whites, in 2020 people of color were overrepresented by 20 to 60 percent among those who experienced violence during an interaction with Toronto police, and black residents were 230 percent more likely to have a police officer point a firearm at them even if they appeared unarmed.

The study clearly shows that 39% of the people against whom Toronto Police used force in 2020 were black. Also in 2020, only 24 percent of the people the Toronto police interacted with were black, meaning black residents were 220 percent overrepresented in police actions aimed at enforcing the law.

And taking into account the 371 times officers pointed guns or rifles at people, the report found that blacks were 230 percent more likely than whites to have a “gun pointed at a police officer even though there was no indication to suggest the presence of weapons.”

The study clearly shows that 39% of the people against whom toronto police used force in 2020 were black. Also in 2020, only 24 percent of the people the Toronto police interacted with were black, meaning black residents were 220 percent overrepresented in police actions aimed at enforcing the law.

Whites, by contrast, even when they were thought to be in possession of weapons were 40% more likely not to be beaten or shot with a taser.

For his part, Toronto Police Chief Ramer said the data confirms what racialized communities have been saying for decades that police have not done enough to correct these injustices.

To correct the situation that emerged from the study, Toronto Police are working on 38 measures to reduce the gap between the number of interactions police have with each racialized community in Toronto and the disproportionate amount of force used by officers against most of them.