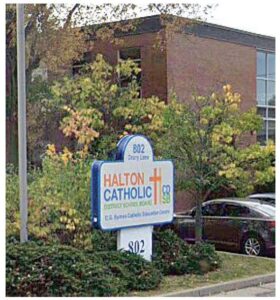 TORONTO – Trustee Vincent Iantomasi has had enough of the scurrilous conduct of woke trustees on his Board and with the seeming untruthfulness of its Secretary/Director, who is moving to St. Michael’s College School in Toronto, with the blessing of his friend the bishop of Hamilton.

Iantomasi’s wife Arlene fired off a letter to Pat Daly and copied to local media, wherein she contests his alleged affirmation that “Trustee Iantomasi was aware that he was found guilty of the code of conduct allegations on May 24,2022”. Untrue, she says “This is to state unequivocally that Trustee Iantomasi was not formally notified that he was found guilty on May 24th.”

Furthermore, she adds, “He has not been on Board email since before April 29,2022 because, (1) he cannot access board emails, [and the HCDSB IT department] is aware [of this]; (2) he’s under Doctor’s orders to rest and stay [away from work] and media; (3) did not receive [the] Board package; (4) the Board [had] passed a motion to excuse him from attending board meetings for medical reasons; (5) Trustee Iantomasi has [neither] received [nor] read the alleged code of conduct report”.

Corriere Canadese has reached out to the departing Daly and to current Chair complainant Marvin Duarte for comment. As at time of going to print, with no response.

During Tuesday’s meeting, July 26, 2022, a Motion (below) presented by former Chair Pat Murphy, and passed by Duarte, Agnew, Guzzo, O’Hearn-Czarnota, to condemn and sanction trustee Iantomasi, included a statement that he was entitled to receive and respond to allegations contained in the investigator’s (unnamed) report by no later than July 29, 2022.

Can any of these individuals be taken seriously? Daly apparently did not have the courtesy to advise Trustee Iantomasi but must have mistaken him for a reporter at the Burlington Post.

Attached, read the reply of A. Iantomasi to said reporter Roland Cilliers who dutifully contacted the Iantomasi for comment.

Thank you for reaching out. This is news to us.

As previously stated, my husband is still on medical leave, and had informed the Board of such back when he entered hospital. He had also informed the Vice Chair of the Board, once he initially received the Chair’s allegations, that he would defend himself against any allegations, however, has not seen the report presented at the Board.

His response to the Vice Chair was sent on May 5, 2022, from hospital prior to the emergency surgery which took place on May 7, 2022, so he has not been able to respond due to his health. He advised the Board and the Director of his leave (surgeon’s note dated May 9th was sent to the Director the same day).

He has not yet been able to devote himself to board matters due to complications and is still recuperating. He has not been attending meetings, has not been on board email, and was unaware of any judgments against him. Further, he has received no correspondence, nor calls, from the Board or the Director’s office advising him of proceedings. Mr. Iantomasi was not sent the Board meeting package.

The decision and the sanctions, given the fact that he is on medical leave and was unable to defend himself are unfortunate and disappointing. Had he been able to address the allegations as per his intentions, he would have done so.

Further, the Board’s Code dictates that only the voted resolution can be made public, and that discussion of any disciplinary matter is to remain in camera.