Italian and Indigenous cuisine together: interview with Theresa Contois (and the Native’s recipe for bison stew) 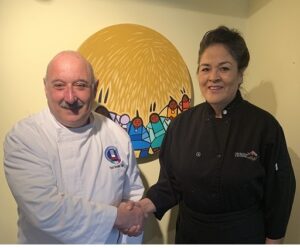 VANCOUVER – A “culinary” bridge between the Italian and Indigenous communities: the idea comes from Apci Canada, the Professional Association of Italian Chefs chaired by Chef Giovanni Trigona, an Italian in Vancouver, British Columbia, who is currently launching a collaboration with fellow Chef Theresa Contois, a Native of the Long Plain First Nation in Manitoba. A friendship destined to lay the foundations for a series of initiatives that will see the collaboration of Italian and Native chefs for the first time in history (in the pic above, Giovanni and Theresa).

“From the first day I arrived in this great country – Giovanni says -, I have always considered myself as a guest of those who as children we called ‘Red Indians’, the Natives, the Indigenous people, the ‘Indians with the headdress of feathers’, the real owners of these lands. Then I met Theresa Contois, an extraordinary Indigenous woman and colleague. And speaking with her, I found many similarities with our Italian grandmothers of the early 1900s: the same pride in the look, many common habits, the ‘ matriarchal regime ‘, and, in the kitchen, owned by the women only and exclusively, their teaching and handing down the recipes by voice, going through fields in search of wild herbs as is done for many regional Italian recipes, respecting seasonality, food, roles, from the family to the surrounding environment. From these basic similarities – Giovanni continues – the idea of ​​an exchange was born, an instructive exercise between the two cultures to be shared with all”. 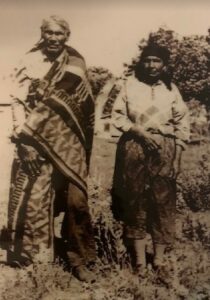 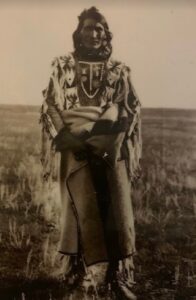 Theresa realized which was her passion – cooking – a little later in life and enrolled in the Culinary Arts program at Vancouver Community College in January 2008, completing its course in January 2009 as the best in her class and subsequently she was asked to compete in the William Tell Restaurant Competition in April 2009. She competed with the top 12 students from the previous year for the 2008 Student of the Year title, reaching the first place.

Participating in the culinary arts program helped her to realize her passion and, after graduation, she was contacted by the head of the department who gave her the opportunity to teach in the Aboriginal culinary arts program.
She currently owns and operates “Cedar Feast House Catering Ltd.”, a catering company offering innovative Aboriginal cuisine as well as specialty menus. She also taught “Fine Dining” at Vancouver Community College in the fine dining restaurant “JJ’s”.

She also completed her provincial instructor diploma in 2014, became a full-time instructor at “VCC” in 2016, completed the “II WSET” (Wine & Spirit Education Trust) level in 2016, graduated in hospitality management in 2016 and also completed her “Red Seal” certification in March 2017. So now she is also a teacher in the Hospitality Department in Food Production Principles at Vancouver Community College.

“Indigenous people – Theresa explains – love to tell stories handed down over time and I want to share one with you all: the story of the 3 Sisters Salads. Before the settlers arrived on Turtle Island, basically North America, the Natives were farmers. and, with a strategically temporal view, they cultivated corn, beans and squash. When the corn grew, the bean could use the corn stalk as a support to grow itself strong and safe and, as for the squash, its large leaves protected the other two plants from insects and the soil from dryness. Hence the story, even with a certain foundation, of the ‘three sisters’: each plant supported the growth and nourishment of the others “.

Finally, Theresa thanks Giovanni Trigona, APCI Canada and the Italian community for the friendship and collaboration just started and she does so by saying “Meigwich” which means “Thank you” in Objibwa (the Ojibwe – also Ojibwa, Ojibway and Chippewa – are Indigenous in Canada and United States and they are part of a larger cultural group known as Anishinaabeg, Ridge Pole Lodge). And of course we say to her: “Meigwich, Theresa!”.

The interview / Theresa: “I tell you about our ancient food habits”

Theresa, which tribe do you belong to?
“Long Plain, Manitoba”.

What kind of meals did your ancestors eat during the day (i.e. breakfast, lunch and dinner)?
“For breakfast bannock, jam and black or mint tea. For lunch usually a kind of stew that was prepared throughout the day. Finally, for dinner everything that was hunted during the day was skinned, cleaned, prepared and shared” .
What relationship did the Natives have with nature and the surrounding world (especially medicinal and cooking herbs)?
“The Indigenous people had and still have a very deep and respectful relationship with nature, depending on it for everything, especially for the crops, so they follow the seasons trying to get the most out of it without any waste”.

Who was in charge of cooking in the tribe?
“The ancestral Indigenous society was that of a hunter / gatherer society. This meant that hunting and gathering were done by the male members of the tribe and cooking was the realm of women.”

How have the recipes been passed down between generations?
“The recipes were handed down from generation to generation orally. However, with the advent of residential schools in 1870 until their closure in 1996, the tradition of handing down the recipes and every tradition was lost due to the attendance of these schools by children, organized by Western settlers to ‘civilize’ the indigenous “. For this reason, modern Chefs such as Chef Theresa have had to “re-learn” their cultural identity, going back to the roots of their traditional indigenous cuisine.

The recipe / The bison stew in the Native’s manner 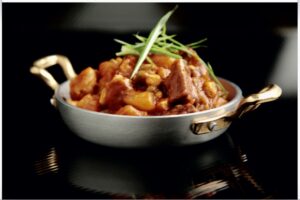 Ingrediants
– ¼ cup of bison lard or fat (to be used to fatten the meat and then remove to blanch the bison)
– 1 kg of stewed buffalo meat, cut into cubes
– 6 Canadian wild onions, coarsely chopped
– 2 cloves of garlic I order diced (or wild garlic)
– 4 cups of bison broth
– 1 sprig of fresh sage
– Various sprigs of rosemary
– 2 tricoccum (wild leeks, creepers, the leaves can be used for soup)
– 4 medium carrots, cleaned and sliced
– 4 medium potatoes, peeled and diced
– 4 celery stalks, diced
– 2 cups of corn
– 2 cups of peas
– Salt and pepper to taste

Method
1. Using a large saucepan, heat the oil.
2. Add the buffalo meat and brown the meat on all sides.
3. Add the wild onions, wild garlic and leek bulbs and cook until translucent.
4. Add the bison broth and sage, bringing to the boil.
5. Add the carrots, potatoes, celery, corn, peas and leek leaves.
6. Continue to simmer until the vegetables are tender, about 1-2 hours.
7. Serve with fried bannock (a kind of focaccia).

And … enjoy your meal!