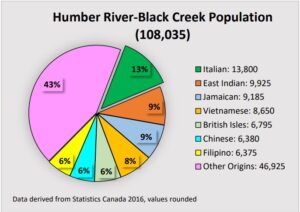 The electoral district of Humber River-Black Creek was created in 2018, but the area has a long history. Formerly known as York West, the district spans an area of 30 square km and is situated along the City of Toronto’s northern limits with Hwy 400 running down the middle. The constituency is comprised of several neighbourhoods including Jane and Finch, Humber Summit, Village at York University and Black Creek. 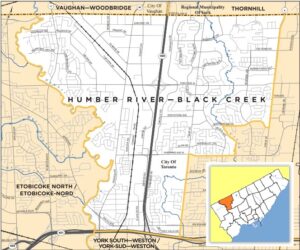 Manufacturing, retail trade and construction industries are some of the major industries that form the base of the local economy. It is understandable that the area has been a popular spot to call home for a diverse group of residents. More than half of the riding’s population are immigrants.

Statistics Canada says that 13,800 residents self-identify as Italian Canadian. They are among the largest ethnic groups originating from Europe and represent 13% of the local population. (See graph at the top of the article)

Historically, provincially, the district has been represented by NDP or Liberal MPPs. However, in 2018, when it was contested for the first time as Humber River-Black Creek, NDP candidate Tom Rakocevic won the seat from the Liberals with 37.4% support of the electorate (11,573 votes).

This time around, the political landscape appears to be trending towards change once again. While Rakocevic, the incumbent, aims to retain the seat for a second term, candidate Ida Li Preti appears to be gaining ground for the Liberals.

When asked how she intends to address the concerns of constituents in her riding, a spokesperson for Li Preti’s campaign shared her Party’s message with the Corriere. The message included parts of the Party’s platform to ensure well paying jobs, the protection of green spaces and better opportunities for seniors to live with dignity. However, she did not provide details as to how, but offered a statement that suggested her approach to leadership would be to work “collaboratively with all levels of government”.

Yet, she failed to attend her own Party Leader’s nomination rally held on April 30. At the time, the OLP Press Secretary commented that she could not attend “due to meetings in the riding”. She has been attending school board meetings.

Meanwhile, PC candidate Paul Nguyen is also vying for the post. Unfortunately, neither he, nor Rakocevic responded to our request for input as at time of going to print.

According to the latest projections by 338Canada.com (May 22), the Liberals are in the lead at 34%. The prediction model uses algorithms that take all major polls into account. It shows the NDP at 29% trailing by five points, followed by the PC at 28%. 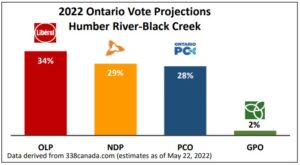