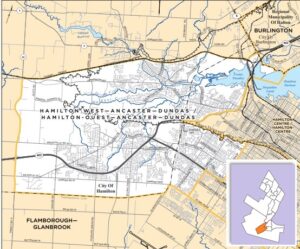 A fairly new district, Hamilton West-Ancaster-Dundas was created in 2015 and situated west of “the Mountain”. The constituency covers a span of 100 square km and encompasses the communities of Ancaster and Dundas.

As of 2016, the riding had a population of 113,025. The area is a popular place to call home for many ethnic groups. Italians, at 12% of the district population, are one of the largest cultural groups which originate from Europe. That represents 13,210 residents of Italian origin who live in the constituency, according to the 2016 Census (most recent data available). They have a culture of voting. 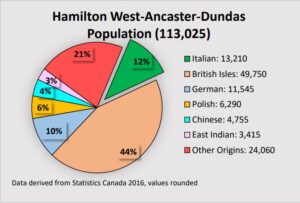 The district’s political landscape is ripe for a three-way match among the major parties leading up to election day on June 2. Current MPP Sandy Shaw seeks to retain the seat for the NDP. If she succeeds, it would be her second term in office.

This time around, challengers in the riding will try to unseat MPP Shaw. Candidate Fred Bennink aims to garner more support for the PC while Shubha Sandill aims to do the same for the Liberals. Also joining the race are candidates Syam Chandra and Lee Weiss Vassor for their respective parties, the Greens and the New Blue. This will be the first time all candidates face off in a general election.

With less than two weeks before the official start of the campaign, it would appear candidates may have their work cut out for them. According to 338Canada.com, the statistical model which uses algorithms that considers all major polls, projections suggests the riding may be up for grabs. The most recent polls (April 14), show all three major political parties, the NDP, the PC and the OLP tied at 30%. 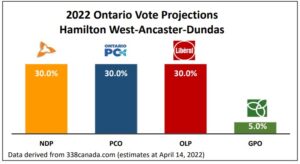 None of the party candidates responded to requests for input at the time of going to print.