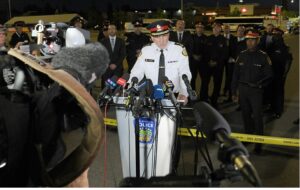 TORONTO – What happened on Monday in the GTA seems to have come out of Quentin Tarantino’s imagination but, unfortunately, it is not a movie: a gunman entered a Tim Hortons in Mississauga, killed a policeman who was having lunch with his colleagues and then he fled to Milton where he went inside a body shop, killing one person and wounding three others, ending up killed in a firefight with the police.

It all starts at around 2.15pm on Monday: the Tim Hortons between Argentia Road and Winston Churchill Boulevard is crowded at that time and there are also some policemen sitting at a table for lunch after having attended a training. Among them is Andrew Hong, 48.

A man enters the room, approaches Hong and shoots him point-blank. He then tries to snatch policeman’s service pistol from his holster, but fails to do so due to the safety lock. Then, before the other agents can stop him, he escapes: he exits the Tim Hortons and climbs aboard a stolen vehicle with which he reaches a body shop in Milton where he opens fire on one person and injures three others. The victim was Shakeel Ashraf, owner of the body shop and, apparently, the former employer of the murderer (revenge?) who again escapes, chased by the police who reach him near Hamilton and, in a firefight close to a cemetery, kills him.

On Monday evening, the Chief of Police, James Ramer, held a press conference (in the pic above) to provide an initial reconstruction of the incident and to remember that “Hong had been with the police for 22 years, was engaged in the traffic services division and was an amazing agent and an exceptional person, as well as a husband and father of two” (in the pic below, Hong: his family wishes to share this picture of Andrew when he proudly graduated from the Ontario Police College). 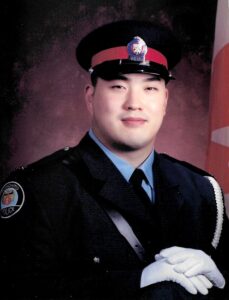 “May Agent Hong rest in peace. Husband, father and hero, he and his loved ones are in my prayers” tweeted Ontario Premier Doug Ford. Toronto Mayor John Tory, who called Hong a” gentle giant”, has ordered the flags remain at half mast in Toronto City Hall, civic centers and other places in the city.

Meanwhile, the provincial police “watchdog” has launched an investigation into the final shooting at the cemetery, to clarify “which weapon killed the suspect and if he had still a gun at the time when he was intercepted by the police”.