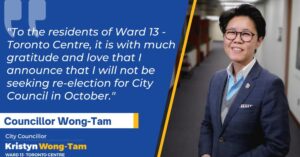 TORONTO – Kristine Wong-Tam, city councilor in Toronto, has decided leave (starting May 4th) her role to run in the next provincial elections with the NDP. The news was announced by the councilor herself through a long letter that appeared on her website – https://www.kristynwongtam.ca – which, according to the Corriere Canadese, gives the impression of being financed by the Municipality itself (a point on which the Corriere Canadese itself asked the candidate to clarify).

If she will lose the elections, Wong-Tam (in the pic above, taken from her Twitter profile @kristynwongtam) will not be able to rejoin the City Council also because she has already announced – in the same letter – that she will not run again in the next municipal elections in the autumn. At the Toronto Catholic District School Board, they are not following the same example: neither the trustee Ida Li Preti (candidate with the Liberals) nor the trustee Angela Kennedy (candidate with the Conservatives) have in fact renounced their position as trustees.