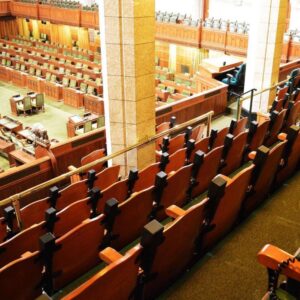 TORONTO – After a ho-hum election that saw a mere 59% voter-turnout, the public is ready for more interesting sport. The official results from Elections Canada are not yet public but Party leaders are being placed on the endangered species list. Yes, that includes Liberal Party Leader, Justin Trudeau, Prime Minister and political “golden boy”. The Liberal Party today “belongs” to its leader more so than any of the others do to theirs.

Contemporary society’s intolerant, “my way or the highway” culture appears incapable of accepting anything less than a complete annihilation of one’s perceived adversaries. In two general elections, Trudeau has not been able to increase his Party’s popular vote beyond the 30% level. Now mainstream media and Press outlets have begun to quote “insiders” on the discontent with his leadership and their speculation about how much longer he will last in office.

It verges on the bizarre. He is the one wielding the hammer, so to speak, and he has publicly manifested a shortness of temper. Some pretenders to the throne have already begun to allow their names to be mixed in the discussion. Surely, the “et tu Brutus” moment is not far off.

Conservative Erin O’Toole witnessed the beginnings of what is in store for him, on TV, during Election night coverage, when a former leadership contender in his own Party admitted it is too early to speculate about whether he will or should survive. His party was unable to defeat the Liberals despite receiving a higher percentage of the popular vote – 32% – than Trudeau’s team.

There does not appear to be an internal Party mechanism to prompt a leadership Review (a euphemism for not-so-bloodless change) for another 18 months. O’Toole will have his energies sapped by trying to make his party relevant in the House of Commons while he tries to ward off those impatient to see the Liberals relegated to the dust bin because they perceive political vigour somewhere else.

Maxime Bernier, as Francesco Veronesi pointed out in Corriere Canadese yesterday’s edition, may be the lightning rod for the latter group. Despite being shut out of the public debates, his movement garnered more than 5% of the popular vote, quadrupling its results from the previous election. He made no efforts to appeal to the “progressives” in Canada. The data miners in all parties will repeat for him what Canadians saw a mere 72 hours ago: that road did not lead to victory.

Try as he might to put on a brave face, Jagmeet Singh’s leadership is far from secure. Except for “pockets of supports here and there”, his party has proven irrelevant at the polls. With Trudeau around, the NDP under Singh resemble little more than “the little engine that couldn’t”; more like a caboose, if that.

Who cares if he thinks that he, not Trudeau, is the true Progressive? Who can tell them apart? It would be best if he were to move his party to a position of power-sharing rather than to insist on finger pointing.

The most influential finger pointers, at this stage in Canadian politics, are the Bloc Quebecois. In this minority Parliament, the leadership of Yves-Francois Blanchet is the only one that is secure. In a European environment, he would be the equivalent of the “belle of the ball”.

But this is Canada, North America. We prefer to dance alone.