Leaders face off in first election debate in Canada 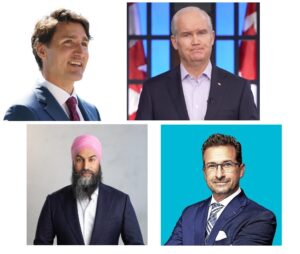 The party leaders appeared on stage for the first time Thursday in a French-language debate that could very well decide who is Canada’s next prime minister.

At the end of 2-hour long debate, they were given one minute each for a closing statement. In which Prime Minister Justin Trudeau says his government was there to help Canadians get through the pandemic. Now, “it’s time to put the pandemic behind us,” he says. A re-elected Liberal government would do that, while also helping families buy their first homes, creating daycare spots and fighting climate change.

Jagmeet Singh says Trudeau abandoned Canadians. He urges Canadians to vote NDP, which would take on climate change, finance affordable housing and ensure that the “ultra rich” pay their fair share of taxes.

Yves-François Blanchet touts the Bloc Quebecois’ record, saying his party made gains for Quebec over the past two years on health funding, agriculture and the environment. Whichever government wins must respect Quebecers’ will, he says.

And main opponent Conservative’s Erin O’Toole says only two leaders can form a government. He says Canadians can choose the same old Trudeau or him – “a new leader with a new approach” who will respect provincial jurisdictions and apply Bill 101 to federally regulated workplaces.

Meanwhile, the national media, CBC’s Poll Tracker projected Trudeau and the Liberals ahead of others in Quebec but the margin has narrowed.

All the pic are taken from the candidates’ Twitter pages