Lecce: “Negotiations? Only if you call off the strike” 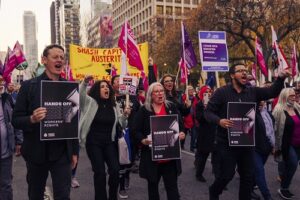 TORONTO – While the government goes ahead to pass the Keeping Students in Schools Act as soon as possible, Education Minister Lecce uses an iron fist with the Canadian Union of Public Employees. Any counter-offer proposed to the government must include the cancellation of the strike scheduled for Friday. “Take the threat off the table and let’s talk about it – said Lecce at a press conference – we were very clear. We are ready to negotiate with those who wish to do so as long as Friday’s strike is called off. We will not accept a strike, neither this Friday nor on any other day.”

The response of the Ontario School Board Council of Unions of CUPE  was not long in coming: “Unless an agreement is reached we will go ahead with the strike that will continue until further notice“, thundered the president Laura Walton.

Following the stalled negotiations, the 55,000 workers, including early childhood educators, educational assistants and guardians, intend to fold their arms on Friday even though looming legislation would make it illegal.

On Tuesday evening the union presented its counteroffer – of which no details have been provided – but Minister Lecce, to get the government to consider it, asks that the strike be canceled. Meanwhile, several school boards, including the public and Catholic ones of Toronto and York and those of Peel and Halton, have already announced that in the event of a strike, their schools will remain closed because they cannot operate safely without the staff represented by CUPE.

The atmosphere is becoming incandescent day by day. To inflame the spirits even more is the decision of the government of the province of Ontario to impose a four-year contract on education workers in addition to prohibiting them from striking under the threat of heavy fines.

Meanwhile, numerous unions, including teachers’ unions currently in talks with the government, have expressed solidarity with CUPE, including the Labourers’ International Union of North America – LiUNA, which gave its support to Ford’s conservatives in last spring’s elections. On Tuesday evening, the Ontario Federation of Labour (OFL) organised a “Hands Off Workers’ Rights” protest in front of Queen’s Park, attended by hundreds of people.

Meanwhile, today in Queen’s Park the tension could be cut with a knife. Members of the Ontario New Democratic Party (NDP) were escorted out of the legislature one by one during Question Time right in the middle of the debate over the controversial bill.

The pandemonium was triggered by the removal of interim NDP leader Peter Tabuns who accused the government of lying to citizens and did not want to withdraw his statement. It was at that point that the other NDP deputies who had started shouting in protest u were expelled for the rest of the day. “I think our message is clear. Dropping the bill and going back to the negotiating table,” Tabuns told reporters, “I think all our grievances, if we want to put it that way, are because Doug Ford doesn’t treat people fairly the way he should. He’s not telling us the truth.” But the government continued on its way and voted on two motions intended to allow the legislation to be passed sooner than expected. The first motion limits the debate on the bill, allowing the government to take the legislation to third reading without it going to committee.