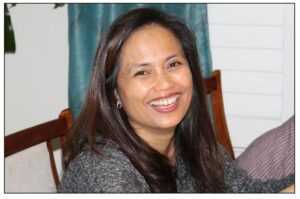 TORONTO –  When a grisly and gory crime hits close to home, it sends a shock wave to the whole Filipino-Canadian community of Toronto, especially to closer friends and relatives of the victim hearing for the first time that when a partner is murdered, the surviving partner is always the suspect. Tragic as it may be, the initial reaction is for everyone to send in their condolences. Only after Yostin Murillo, a main suspect of Costa Rican background, was arrested were friends and relatives of the couple able to breathe a sigh of relief.

Rhoderie Estrada Aquintey (in the pic above, from Facebook), a 17-year nurse at St Joseph Hospital and a mother of three little girls, was found slain at the residence she shared with her family on the night of May 2018. As funeral arrangements were being prepared, a second suspect, David Beck, of Korean background, was arrested. Both suspects in custody are in their early 20s.

The wake of Rhoderie Estrada Aquintey was held with tremendous support from the community, whether they know her personally or not. The life of the family of Rhoderie was turned upside down, moving out of their residence and the school the three girls attended. The family refused to continue living in the house which reminded them of their loss wherever they turned.

The case of Crown vs the suspects was heard in four different courts – from the Old City Hall, 1000 Finch Dufferin, to College Park court room to the 361 Court House at University Ave. After about twenty meetings on different occasions regarding legal procedures and postponement because of pandemic, the hearing finally went on full gear. A publicity court ban was instituted at the beginning. A jury of six men and six women from different walks of life was present. The first witness was the Gerald Aquintey, the husband, followed by the first officer on the scene of the crime, the EMS, pathologist, expert on DNA, and police Investigators. Numerous evidence were presented.

The accused were represented fully by public defender and counsel and on the opposite side, Beverley Richard was the crown prosecutor. After gruelling questioning, the case was left to the hands of jurors for verdict. Five days deliberation by the jury followed before a verdict of guilty as charged came out. Justice was served, no less no more.

Despite this verdict, there was a sense of profound sadness in the court. A life was savagely taken and no court of justice can change this.

Rhoderie was a daughter, a sister, a wife, a mother and a nurse health care provider. Life can not be the same for the family. But closure has commenced. Impact statement was made by husband, daughters, mother/father of Rhoderic, and several friends and co-workers.

A sentence of life imprisonment without possibility of parol after twenty five years was handed down.