London attack, vigil for victims amid grief and disbelief 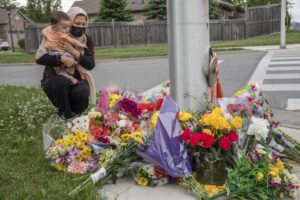 The four family members who were run over and killed in London on Sunday in what police say was “an attack on their Muslim faith” have been identified.

A family spokesman identified the victims as Salman Afzaal, his wife Madiha, their daughter Yumna and Salman’s mother. The only survivor is 9-year-old Fayez Afzaal. A family destroyed within seconds by London resident Nathaniel Veltman, 20: he has been charged with four counts of first-degree murder and one count of attempted murder.

It’s a grieving and wounded community, the Muslim community of the city that’s 190 kilometres from Toronto.

Speaking in the House of Commons on Tuesday, Prime Minister Justin Trudeau called Veltman’s action “a terrorist attack, motivated by hatred.” “This act of terrorism and Islamophobia is disgusting. It’s heartbreaking. What can be said when a family has been taken away from their loved ones? When a child is in the hospital? When a community is in mourning? All I can say to all those who are grieving, to those who are angry, to those who are afraid, is that the community is with them. We will not let hate divide us.” “This is nothing short of a terrorist attack on innocent people based on their faith and religion and there is no place for it in Ontario – Ford added – we are a community that remains united and we will be united in supporting the Muslim community.”

Last night, during a vigil at the London Muslim Mosque attended by the family, the victims of this senseless act of violence were remembered: Prime Minister Justin Trudeau, Conservative Party and NDP leaders Erin O’Toole and Jagmeet Singh and Ontario Premier Doug Ford were also present. For the occasion, the provincial government, on an extraordinary occasion, did not apply the current regulation limiting the number of people who can gather so that, Ford said, “people can be close to the family and members of the Muslim community”.

London Mayor Ed Holder also had words of affection for the entire grieving community: “The Muslim community is truly an important part of our city. It makes a phenomenal contribution to London’s economic and cultural well-being. They have always been there for us as a community and now it is up to us to be there for them – said the first citizen – Sunday’s attack was an unimaginable tragedy that caused indescribable pain and suffering”.

Meanwhile, in an interview with CP24, longtime family friend Saboor Khan said the victims “fought very hard” to establish themselves as new immigrants and eventually became valued members of the London community. “What has happened underlines the need for real action to defeat Islamophobia – said Khan – I am simply devastated. How many more does it take for us to take this seriously and say enough is enough? We must criminalize Islamophobia, we must pay attention to the hate that finds space online and in other contexts and we must use strong measures against people who carry out violence in the name of faith”.