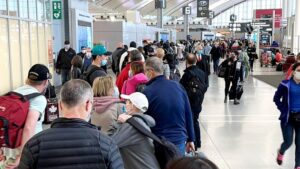 TORONTO – Due to longer-than-usual queues at security, travelers about to board a plane are asked to arrive at Toronto’s Pearson International Airport at least two hours earlier than their flights.

A spokesman for the Greater Toronto Airport Authority issued the warning this morning, urging travelers not only to arrive early, but to prepare to pass through security with all the necessary documentation on hand. “Departing domestic passengers must arrive at least two hours before their scheduled flight while departing international passengers are required to arrive three hours earlier than their scheduled flight,” he said. Usually those traveling within Canada only need to arrive at the airport about 90 minutes before their flight.

The headaches began on Monday morning: the Canadian Air Transport Security Authority (CATSA) confirmed to CTV News Toronto that it was dealing with staffing problems.

And the frustration of travelers was not long in coming. People about to leave Pearson vented on social media saying they were stuck in “a chaotic situation” due to long queues and delays at security checks. “CATSA screening workers are not immune to the recruitment and retention challenges faced by the broader commercial aviation sector, resources could be used across the board more efficiently between cross-border and national and international checkpoints due to staggered passenger spikes. As air transport regains momentum, we are seeing simultaneous spikes, which can cause passengers to flood more than one security checkpoint at the same time, making it more difficult to redistribute resources to cope with these passenger volumes.”

While airport officials asked passengers waiting to board the Pearson to arm themselves with a lot of patience, those arriving had to face long waiting times before they could leave the airport.

In recent weeks, many travelers arriving in Toronto once they reach the gate have not seen the aircraft’s tailgate open immediately. They were asked instead to stay stationary on the plane: some passengers waited up to 3 hours before getting off and then found another long queue at customs.

According to Pearson spokesman Tori Gass, there is not only one factor contributing to traffic jams at the arrival gate. “Many elements can contribute to passenger waiting times – said Gass – currently due to the requirements of the Public Health Agency of Canada the time taken by CBSA officers for each passenger is still significantly longer than before the pandemic”.

According to officials, there are on average more than 30,000 international passengers arriving per day during this period. And this number is expected to reach about 45,000 a day as summer approaches.