Mandatory vaccine: Minister Duclos in pressing on the Provinces 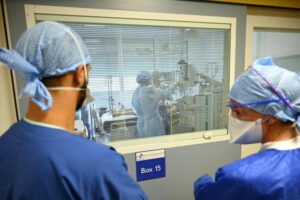 To launch the first significant signal was last week Katharine Smart, president of the Canadian Medical Association, who stressed that it is necessary to discuss the thorny issue, to try to understand if there is the real political will to take a path that in Europe has already found fertile ground in Austria, Germany, Greece and – albeit partially, since the measure concerns only the over 50s – in Italy. Over the weekend it was the turn of the Federal Minister of Health, Jean-Yves Duclos, who reiterated how with Omicron the pandemic has entered a new phase and, consequently, the various levels of government should also adapt with new tools to counter the contagion.

“Our health system – underlined the exponent of the liberal government – is suffering the weight of the new wave of Covid-19 infections. Consequently, the Ministers of Health of the Provinces and Territories should at least consider the vaccination obligation”. It is therefore not a guideline of the federal executive, given that on health the full competences at the constitutional level are of the individual Provinces, but an invitation to examine the vaccination obligation as a potential option to curb the wave of infections.

“What we are seeing today is that our health system is still fragile and people are tired. And the only way to defeat Covid-19, this variant and subsequent strains, is through vaccination. There are many very important contrast tools, such as personal protection means, physical distancing, tampons: but what will make us overcome this crisis will be vaccination”.

Now it will be a question of whether there are political margins to be able to move forward along this path. “I want to point this out – added Duclos – because it is a type of conversation that the Provinces and Territories, together with the federal government, will be able to carry out in the coming weeks and months”.

But are there really these margins? Despite the appeal of the Minister of Health, so far no provincial leader has broken a spear in favor of the vaccination obligation. After Duclos’ speech, the only prime minister to take a stand was Alberta Jason Kenney, who soundly rejected the proposal from Ottawa.

“Alberta’s legislative assembly has removed the power to impose mandatory vaccination from the Public Health Act and we have no intention of reversing this decision. While we strongly encourage getting vaccinated, in the end it must be a decision for the individual.”