Matter and Form in Parliamentary Organizations 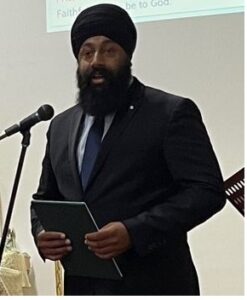 TORONTO – Choices for Parliamentary positions by leaders nearly always address the basic need to balance substance and symbolism of political office. Prime Ministers have the right to appoint who should be Ministers. Leaders of the [official] Opposition counter with “Shadow Ministers”, Critics whose task it is to analyse, critique/criticize the government’s initiatives in a given portfolio and, if need be, propose alternatives and readiness strategies in the event of a change in government.

That’s the “what” of the message. As twentieth century Canadian communications guru, Marshall McLuhan, used to say, the “who” delivers the message may be the more important part of that message, because “the messenger is the message”.

Just before the newly elected leader of the Conservative Party of Canada, Pierre Polievre released his list of nominees for Critics and Associate Critics roles, his staff offered the Corriere Canadese an exclusive interview with MP Jasraj Singh Hallan. He would be the newly minted Critic for Finance to counter the government’s own Chrystia Freeland.

That, in itself, was a message to the electorate. A turbaned Sikh, appointed to the most senior portfolio of government chose to reach out to nonmainstream media for the first encounter with the public. The Corriere is not short of topics to examine on an hourly basis. Given the public’s perception of our approaches to partisan positions in Parliament, it was a courageous initiative. Mr. Hallan held his ground.

He delivered the expected messages on “Justinflation”, tax reform [cuts], the need to reduce the debt, the deficit and, most importantly, the need to consult and meet with the public and stakeholders. We asked if he felt ready to tackle the “big issues”.

“I come from the residential construction sector as small to mid-sized entrepreneur dependent on the vagaries of the energy sector, the availability of labour, affordability of finance and the development policies of local and provincial government. When was the last time we had Minister of Finance who had the “bread and butter” experience that flow from the implications of macro issues have the average citizen”, he said.

Fair enough, we countered, but how will you address the big engine drivers of the economy specific to Central Canada [Ontario], we asked. His responses suggested a level of preparedness not normally seen so early on in an appointment of this magnitude.

“Coming from Alberta, it is easy for me point out that the vast and underdeveloped energy resources of Canada’s Western provinces can be a part of the solution to Canada’s economic woes. Equally significant to that economic mix is the importance of treating Immigration programs as economic initiatives. I will be working with my colleague in our shadow Cabinet on this. Demographic policies are vital to the success of our industrial strategy. And, we will have to work diligently to ensure that our automotive sector remains innovative and competitive,” he added.

The interview could easily have developed a broader scope, but this was a “get to know us” introductory conversation, useful for the Corriere’s readership, especially since it also served as a precursor to Pierre Polievre’s meeting with the National Ethnic Press and Media Council of Canada on October 17.

Back to the issue of messenger and message: Polievre’s lieutenant, Jasraj Hallan, may turn out to be the best counterbalance to Justin Trudeau’s Jagmeet Singh and the issue of the organizational potential “ethnic communities” represent.