May 1st International Labor Day – thanks to Canada! 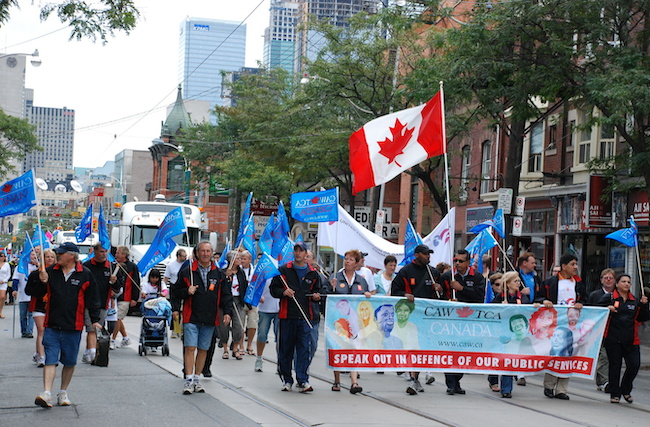 How did May 1st begin in the world and why is Canada’s Labor Day celebrated in September?

Do you think that current labor standards, such as the 8-hour working day and trade unions have always existed?

You’re right! The average working day today is 8 hours and the trade unions have been with us for a very long time.

Earlier, well over 100 years ago, at the end of the 19th century, workers in Canada, the United States and in the world had terrible working conditions, low wages and worked up to 12 hours a day – these were the standards.

The holiday was introduced in 1889 by the Second International to commemorate the events of the first days of May 1886 in Chicago, in the United States, during a strike as part of the nationwide campaign to introduce an 8-hour working day. 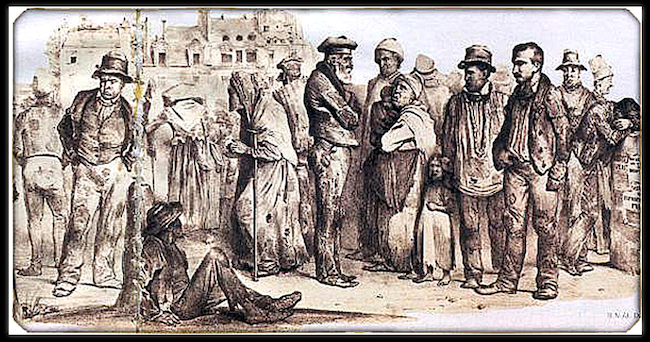 But few people know that those events were inspired by earlier movements in Canada.

Yes, Labor Day and May Day have roots in Canada!

All the protests, demonstrations and events in the world related to the workers ‘struggle for workers’ rights began in Toronto.

It was on April 15, 1872, that the Toronto Trades Assembly organized the first major demonstration in Canada for workers’ rights.

The purpose of the demonstration was to release 24 leaders of the Toronto Typographical Union, who were imprisoned for strikes and campaigning for a 9-hour working day. At the time, trade unions were still illegal, and strikes were seen as a criminal conspiracy to disrupt trade. Nevertheless, the Toronto Trades Assembly was already a significant organization, encouraging workers to form trade unions, mediating disputes between employers and workers, and signaling the mistreatment of workers.

The parade enjoyed tremendous public support, and the authorities could no longer deny the important role that trade unions had to play in the emerging Canadian society. A few months later, a similar parade was held in Ottawa and passed the home of Canada’s first prime minister, Sir John Macdonald. Later that day, he appeared before the convention and promised to repeal all Canadian anti-union laws. It happened the same year and eventually led to the founding of the Canadian Labor Congress in 1883.

Originally, Labor Day was celebrated in the spring, but after 1894 it was moved to the fall. A similar holiday, Labor Day, is celebrated on the same day in the United States.

Canadian trade unions are proud that this celebration was inspired by their efforts to improve workers’ rights.

Many countries, regimes or institutions used the endeavors and events of the late 19th century for their own purposes.

Other traditions related to May 1st have, for example, the Catholic Church, in which on May 1st the memory of St. Joseph the Craftsman. This memory was introduced into the liturgical calendar by Pope Pius XII in 1955 as an alternative to the secular Labor Day.

Poland as a state did not exist then. Polish lands were under the Prussian, Russian and Austrian partitions. In Poland, the first celebrations took place in 1890 and were held against the will of the partitioning powers. The application to establish May 1st as a Labor Day in Poland, with the right to a day off, was discussed in the Legislative Sejm in 1919. May 1st in Poland has been a public holiday since 1950, free from work.

In Germany, May 1st became a public holiday of the Third Reich in 1933, right after the formation of the Nazi government. The holiday was called National Labor Day, and its official celebrations were closely related to the Nazi ideology. Any separate celebrations by communists, social democrats or trade unions were forbidden. After the Second World War, May 1st remained a public holiday in both East and West Germany.

On the first Friday of May, May Day has been celebrated in the Republic of Ireland since 1994, and in Northern Ireland since 1978. On this day, rallies are held in Dublin and Belfast under the patronage of the Irish Congress of Trade Unions (ITUC), as well as other events such as lectures, concerts and film screenings as part of the broad May Day festival.

In Italy, the first celebration of May 1st took place in 1890. Initially, these were attempts to celebrate the achievements of workers in the struggle for their rights and better social and economic conditions. The holiday was abolished under the fascist regime and immediately restored after the Second World War.

International Day of Workers’ Solidarity, popularly known as Labor Day or simply May 1, has been celebrated annually since 1890 on May 1 in more than 80 countries around the world. 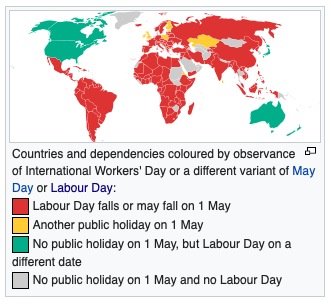 Working 8 hours a day nowadays, e.g., 9-5, with earnings allowing for a comfortable life, it is good to remember where this luxury came from.