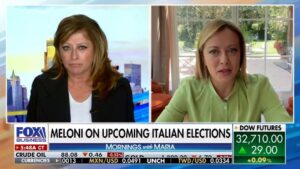 ROME – “The polls say that Fratelli d’Italia is the first party in Italy, and the first party of the coalition will indicate the name of the premier. Let’s see what will happen in the elections, if so… I could be the first woman to lead the Italian government in history and it would be for me a great honor”.

This was stated by the leader of FdI, Giorgia Meloni, interviewed (in the photo above) by the US broadcaster Fox Business, the thematic channel of Fox News.

The anchorwoman Maria Bartiromo, a well-known journalist in the United States, asked the questions to Meloni.

Of Italian descent, Bartilomo specializes in economic issues, was the first journalist to lead a daily program live from Wall Street and has played the role of moderator in several editions of the Davos World Economic Forum.

“The situation in which Italy finds itself – said Meloni in the interview, speaking in English – is not the easiest and we all know it. We have a war in Europe, inflation rising, problems with gas supplies and electricity and therefore it will be a difficult season. This is why in the electoral campaign we are telling the Italians the truth about what we can do “.

And looking to the future, the leader of FdI explained: “We are sure where Italy should stand to defend its national interests. And one of the most important things we can do is cut Russian gas supplies, but the problem is that we have to talk about alternatives, diversifying the sources”.

Bartilomo introduced Meloni as a” friend of the United States “, recalling her participation in the Cpac, the conservative gathering, held in Florida in February.

Then speaking to Studio Aperto on Italian TV, the president of FdI guaranteed that in the center-right program there will be an explicit reference to foreign policy. “For FdI it is a decisive element, particularly important in this phase, in which we cannot allow Italy to hesitate”, she assured. “It is essential for our nation to demonstrate seriousness, loyalty, a high standing, also in order to better claim its interests in the international arena, on a different and greater presence in the Mediterranean, on compensation related to sanctions. The basis for defending one’s own interest national team is to prove credible “.

Finally, again at Studio Aperto she spoke about immigration to Italy. “The issue of landings must be faced with the naval blockade, which is nothing more than a European mission, to be agreed with the European institutions, to negotiate together with Libya the possibility that departing boats will stop, with the opening in Africa of hotspots, the evaluation in Africa of who has the right to be refugees and of those who are irregular, the distribution of real refugees and sending the others back. It is necessary to stop considering the same thing as refugees and illegal immigrants: it is a falsehood constructed in recent years by the left “, she concluded.

HERE BELOW, THE VIDEO WITH THE INTERVIEW ON FOX BUSINESS