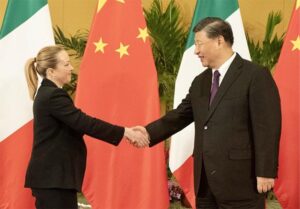 BALI – All eyes were on her: the only female premier among the Big Twenty on the planet, 19 to 1. And she, Giorgia Meloni, did not let the opportunity slip away. “Italy was the protagonist of this G20, there was a lot of curiosity and attention around us. Certainly also the fact that Italy was the only nation represented by a female head of government” said the Italian premier at the end of the G20, held until today in Indonesia.

Then, a sideswipe: “Obviously for a nation in which we have often complained that we seem to bring up the rear on the subject of female participation, finding ourselves today to be an avant-garde is certainly a pleasing element but I don’t think it was simply the novelty element that drew attention to us” she said. According to Meloni, in fact, the G20 was “a success” because it “marks a rapprochement between the West and the rest of the world with an agreement on the final text for a fundamental step, i.e. the condemnation of Russian aggression”.

The bilateral meetings that the Italian prime minister has had with the other leaders are also positive, at least on paper. In particular, the one with the Chinese president, Xi Jinping, an encounter that saw not only two prime ministers face to face, but also two leaders on opposite poles: the head of the largest Communist Party in the world and the leader of the political movement still bears in its symbol the “flame” of the heirs of Fascism: Fratelli d’Italia.

The conversation, however, was extremely cordial and, perhaps, the most profitable of all. Xi and Giorgia spoke for about an hour about relations between the EU and China, hoping for their relaunch. The Italian prime minister underlined the importance of “resuming all channels of dialogue, including that on human rights” and the need to collaborate for the effective management of the most serious and pressing global and regional challenges”. The two leaders also paid particular attention to the war in Ukraine, agreeing that every diplomatic initiative must be promoted to put an end to the conflict and avoid an escalation.

During the bilateral meeting, Meloni then expressed “the Italian government’s intention to promote mutual economic interests, also with a view to an increase in Italian exports to China and Xi replied that his country not only “is willing to import more high-quality Italian products”, but will welcome Italy as a Country of Honor at the China International Consumer Goods Expo 2023. Beijing, said Xi Jinping, is also ready “to continue to strengthen communication and coordination on multilateral platforms such as the G20, to deepen solidarity and cooperation, to promote authentic multilateralism and to work together to face important challenges such as the global economy”.

At the end of the meeting, the Chinese president invited the Italian premier to pay a visit in China: invitation that Meloni immediately accepted. The ritual photo is significant: the two shake hands, smiling, in front of the red flag of the People’s Republic of China.

According to Meloni, the other meetings were also positive, in particular those with the American president Joe Biden (“We shared the need to think about a shared solution to the conflict in Ukraine” and then “we obtained from the USA the guarantee of their willingness to increase gas supplies”), with Indian Prime Minister Narendra Modi (“We discussed the need to strengthen relations, which have long been below their potential”) and with Turkish President Recep Tayyip Erdogan (“We stressed the need to work together to fight irregular migration and favor the resolution of the Libyan crisis, also sharing the hope of a further strengthening of bilateral trade relations”).

No meeting, instead, with the French President Emmanuel Macron, after the chill between Italy and France over the issue of migrants: “But there’s no need to get to Bali to talk are of European things “, glossed over Meloni. “There have been no bilateral meetings between EU countries because they are held in another area”.

Finally, the Italy-Canada meeting. “We also met Justin Trudeau: we have a long history of friendship with Canada. Canada’s role is very positive within NATO because it has always guaranteed support without ever having had direct threats on its territory: it is a reliable ally and fair. And there are attractive prospects on the subject of energy and renewables”, said Meloni.

For his part, Trudeau posted a photo taken during his meeting with the Italian premier on his Twitter profile, writing: “Today, I had my first in-person meeting with Prime Minister @GiorgiaMeloni. We discussed the historic ties between Canada and Italy, our strong support for Ukraine, and working together to advance the relationship between our two countries and create good jobs“. However, the comments of the Canadian prime minister’s followers are not all positive. Like that of a certain Victor Conway, who wrote below to Trudeau’s tweet: “Georgia is more man than you could ever be”. 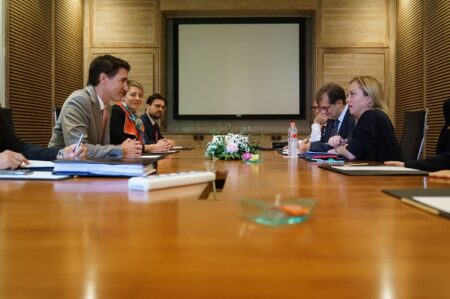 In the pics above, Giorgia Meloni with Xi Jinping (photo from www.governo.it) and during the meeting with Justin Trudeau (from Twitter- @JustinTrudeau)