Mississauga-Lakeshore: A battleground district between the PC and the Liberals 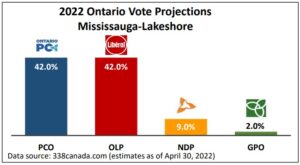 As the provincial election campaign gets underway, changes in the political landscape are brewing in some ridings. The outcome following the June 2 vote may turn out new leaders in some GTA districts. One area to watch is Mississauga-Lakeshore (formally Mississauga South prior to 2015).

The district is situated along the north shore of Lake Ontario and encompasses the southern portion of the City of Mississauga, including the communities of Clarkson, Lorne Park and Port Credit. 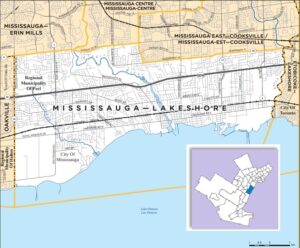 Mississauga–Lakeshore is home to a vibrant population of 117,445 residents, many of which identify as first-generation immigrants to Canada. For instance, 10,595 constituents self-identify as Italian Canadian (as per the 2016 Census, the most recent data available). That represents 9% of the district population and one of the largest ethnic groups that originate from Europe. 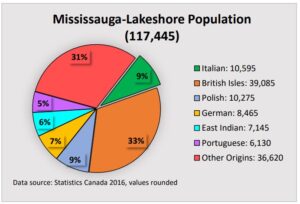 Prior to that, when the riding was known as Mississauga South, it was considered a PC stronghold until electors began to shift support towards the Liberals. Between the years 2007 and 2018, Charles Sousa held the riding for the Liberals, for three consecutive terms.

This time around, the PC’s closest contender is candidate Elizabeth Mendes. She aims to garner more support for the Liberals. It would appear the district is developing into a battleground for the PC and the Liberals. Cuzzetto and Mendes did not respond to our request for input at the time of going to print. 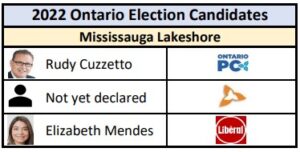 Another name on this year’s ballot is David Zeni for the Green Party of Ontario. Meanwhile, the NDP have yet to declare a candidate for the riding. A nomination meeting scheduled Wednesday evening (May 4) will determine who that may be.

According to the most recent projections by 338Canada.com (April 30), the PC and OLP are tied at 42%. The prediction model which uses algorithms and considers all major polls show the NDP trail at 9% followed by the Greens at 2%. (See graph at the top of the article)