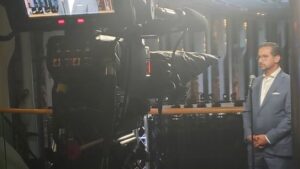 TORONTO – That is an unfair headline. The consortium of mainstream media earned another $3 million from government coffers. Additionally major media outlets were able to gauge the numbers of viewers for their advertisers, going forward, and their individual share of that market.

Finally, some political pundits, gifted with prior knowledge of the questions and strategic plan their employers would have shared as a prior condition exacted on the various campaigns, were able to illustrate their wisdom on the “whys and wherefores” of the events on speculative outcomes.

Canadian election campaigns and debates are supposed to be about issues of concern to Canadians generally. Yet Canada’s multilingual group comprising more than 22% of the Canadian population was excluded. Not surprisingly, nobody in the “focus group” canvassed from our paper’s reach (hardcopy and online) watched.

I confess to having had difficulty maintaining interest in a robotic exercise devoid of vision, merit in programs or dexterity in handling the extemporaneous, the unforeseen.

It was a shallow exercise best characterized as “believe me, I am better than they are”. No proof required. Then the only bombshell of the evening exploded when the issue of “systemic discrimination” inherent in a couple of pieces of legislation passed by the Quebec Legislature was raised (more as an indication of false concern than a matter of debate). It raised the hackles of BQ’s Blanchet and subsequently of the Quebec Premier.

Just in case you might have misunderstood, allow me to recap Mr. Blanchet’s contention. First, Quebec is a nation unto itself, sovereign in its authority to pass legislation applicable within its own borders; and, it deals with other sovereign jurisdictions on a peer-to-peer basis. Comment or views on its legislation are beyond the competence of the debate and indeed of Canadian politicians.

Secondly, without being defensive, he contends Quebec is a secular society because it has found that religion had proved ineffective in protecting the rights of women and minorities. Whether one believes that claim or not, Mr. Singh who overtly displays his religious attire would be “unwelcome” in the Quebec Legislature or any public institutions (except as an erstwhile visitor).

Thirdly, he claims with definitiveness, the House of Commons recognized the authority of Quebec as a Nation in its last sitting. Were the MPs present lying then or now? He found the mere suggestion of systemic racism or bigotry offensive. Debaters immediately came to heel as defenders of Quebec.

Quebec Premier Legault condemned the Greens, Liberals and the NDPers as enemies of Quebec’s interests. Quebec City, capital of the nation, not Ottawa, capital of Canada “calls the shots” in Quebec. Case closed, apologize and go home.