More than 3,000 evacuees arrived now in Canada from Afghanistan 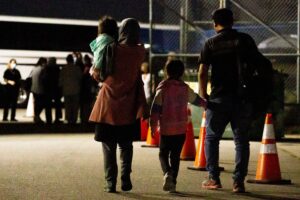 OTTAWA – Canada evacuated over 3,700 people from Afghanistan: more than 3,000 evacuees have now arrived in Canada, which includes more than 900 passengers who arrived on four flights since Sunday, August 29. “We expect more to arrive here in the near future”, said today Marco Mendicino, Minister of Immigration, Refugees and Citizenship, and Marc Garneau, Minister of Foreign Affairs.

“The Government of Canada – they said – continues to use all avenues available to help Canadian citizens, permanent residents and their families, and vulnerable Afghans eligible under the special immigration measures, to leave Afghanistan and come to Canada. We thank neighbouring countries for their support in welcoming refugees and we continue to have daily discussions with allies and countries in the region to help get as many people to safety as possible”.

The ability to process applications, ministers assure, has not been affected by the closure of the embassy in Kabul and Hamid Karzai International Airport. “Afghans don’t need to be in Afghanistan, or return to Afghanistan, to be eligible or to have their applications processed”.

To date, Immigration, Refugees and Citizenship Canada (IRCC) has approved applications for 6,550 people under the special immigration measures and “we are working to process the remaining applications as quickly as possible. As applications are approved, we are communicating with individuals to update them on their files”.

IRCC continues to respond to requests for information as quickly as possible. As of August 31, 2021, Immigration, Refugees and Citizenship Canada (IRCC) had responded to more than 100,000 emails and more than 12,000 calls to offices phone line with an average wait time of less than 3 minutes.

Refugees are being matched with communities where settlement support is already in place. Consideration is given to whether they have family members in Canada, as well as the availability of schools, housing, and language training. Canada continues to process applications as quickly as possible under the special immigration measures.

Anyway, the ministers underline, “Canadians have opened their homes and their hearts to Afghan refugees in 20 communities in British Columbia, Alberta, Manitoba, Ontario, New Brunswick and Prince Edward Island. With a well‑established settlement network anchored across the country, more communities in other provinces and territories are also expected to welcome refugees in the days ahead and help them adjust to life in Canada”.

“In addition, we continue to work with the United States to welcome up to 5,000 refugees to Canada, whose evacuations were facilitated by the United States. These refugees will be accepted as part of Canada’s program to accept up to 20,000 refugees, which include persecuted Afghan minorities, women human rights advocates, LGBT individuals, and journalists”.

“The situation on the ground in Afghanistan – they add – remains fluid, and we continue to be in regular contact with Canadian citizens, permanent residents and Afghan applicants. According to our records, there are 470 Canadian citizens who currently remain in Afghanistan, as well as close to 260 permanent residents and 500 family members. Some Canadians have managed to get to a third country. Our network of embassies and consulates is providing consular assistance wherever they are. We continue to work on ensuring safe passage with partners including the G7, NATO, the European Union, Qatar and Turkey, as well as Afghanistan’s neighbouring countries. Options are being explored for the reopening of the Kabul airport as soon as security can be restored, which is necessary for both departure and humanitarian access in this landlocked country. Our senior official for Afghanistan, David Sproule, is currently in Doha, Qatar, to convey Canada’s perspective on safe passage as well as on security and access to humanitarian and international assistance. He has joined diplomats from several countries to work together on the international response to the crisis in Afghanistan”.

“We are working closely with the United Nations and other trusted international partners – the ministers say – to provide an additional $50 million for the humanitarian response. With Canada’s support, humanitarian partners will provide lifesaving assistance, such as food, support for health care, clean water and sanitation”.

And they conclude: “On August 29, the Government of Canada announced that Canada joined the United States and over 100 allies, calling on the Taliban to honour its assurance that all foreign nationals and Afghans with travel authorization from our countries will be allowed to safely travel outside the country. In addition, the United Nations Security Council adopted a resolution calling on the Taliban to allow safe passage to foreign nationals and Afghans with official documentation to travel to another country. This will be the first true test for the Taliban from the international community. We will judge them by their actions, not their words”.

In the pic, taken from https://twitter.com/CanadianForces, the Afghans arriving