NDP and Toronto City Councillors: irrelevant and out of touch 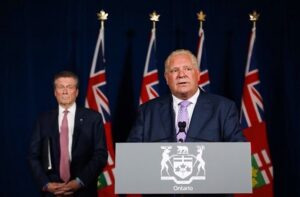 TORONTO – I guess we all live in a dream world of our own. The Ontario “New” Democratic Party (NDP) will confirm its new Leader after a complex formula that considers the proportionality of its constituent partnerships – unions and associations.

By the way, the results of the last election confirmed that by and large, those “typical reservoirs” of left-wing, worker, “marginalized”, interests, had abandoned the party. So did virtually everyone else.

Only 43.5% of eligible voters in Ontario even bothered to vote, and, those who did gave the Conservatives a resounding majority government. The NDP and the Liberals each garnered the vote of about 23% of the total votes cast – less than 10% of the voting public a piece. Yawn.

In their regeneration process – selection of a new leader – no one wanted the job, except Marit Stiles. She is the only one who produced the required 100 signatures and $55,000 deposit to qualify. That is all! It must be a difficult barrier to overcome.

More significantly, only six other MPPs, out of a total of 31 (20%, one in five), supported her candidacy. She has her work cut out for her. That party is in terrible shape: read the list of its “shadow cabinet “(critics) for the Legislature. To be kind, it has a pretty narrow focus – ultra woke by design. It may be virtually impossible to expand the franchise from there.

Someone who will have an “easier ride” is Mayor John Tory. He only needs eight councillors to vote his way to implement his vision for Toronto. Fifteen councillors did him a big favour. They signed a letter objecting to his Super Mayor powers and called on him to reject them (undemocratic, they say). The leader of the fifteen is Josh Matlow.

His ambitions to replace Tory have been manifest for those who follow him. His, and their, protestations might have received more attention if the letter had been accompanied by a contractual agreement indicating the signatories would renounce the super mayor powers, were any of them to achieve the position.

Meanwhile, John Tory has already moved on. Without any apparent consultations, he has appointed a new City Manager, the individual entrusted with running the bureaucracy at the municipality. He needs to transition City Council from its focus on social/moral issues to one where infrastructure and service to ratepayers take precedence.

If you have attempted a trip to Downtown (on the other hand, do not), you will understand the morass that is now our once efficient roadway system. Obstruction, not construction, seems to be the goal. Check out the Eglinton Crosstown LRT, now into its third decade of development, or the Finch Ave LRT, destined to be “a work in progress” for at least one more decade, to get a sense of the nonsense that prevails in planning at Toronto City Council. From a personal perspective, I have a great deal of respect for those who place their name on a ballot and expose themselves to regular public ridicule. It is an unforgiving “profession”. Yet, to paraphrase a former Prime Minister of Italy reflecting on his former party’s fortunes, it used to reflect the public’s vision.

Maybe he and others in his former party had Toronto City Council and the NDP in mind when they suggested their party, the PD – Partito Democratico – be blown up and start over again.