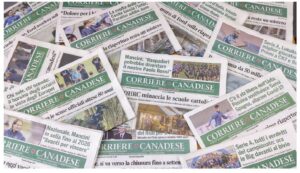 TORONTO – It’s true: the world has changed and that news “travels” online. But it is equally true that newspapers (those made of paper) resist. And the community ones, like our partner Corriere Canadese, manage to “hold out” as much as the mainstream ones.

We don’t say it. This was revealed by a new study, the result of a survey carried out by Maru Public Opinion on a sample of 1,517 Canadians and published today.

The study shows that the sources from which “news consumers” draw vary significantly by age group. Let’s see how, according to CityNews.ca in the report published today.

Even in the 35-54 age group, 82% “consume” news daily, but the percentages of the sources change: 36% watch the news on tv, 35% consult newspapers’ websites, 32% read television news’ sites, 29% follow television stations dedicated only to economic news, 27% “surf” social media such as Facebook and Instagram, 22% listen to radio news, 17% watch Google.

Despite the invasion of information on the web, therefore, a large slice of adult readers remain faithful to the newspapers, be it mainstream (the “big” national newspapers) or community ones. And this especially happens in a country like Canada, extremely multi-ethnic, where the many communities have only one opportunity to read news of interest in their languages ​​of origin: the community newspapers, with their websites and their pages on social networks.

Regardless of age, the data still changes. Taking into consideration all the ages together, in fact, it emerges that 45% watch the evening news on tv, 29% follow the website of a newspaper, 29% the website of a tv, 29% a television station dedicated to news economic, 26% social media such as Facebook and Instagram, 24% radio news and, finally, 14% find the news on Twitter. But beware: the overwhelming majority of the news available on social networks are produced by the newspapers that then publish them on their websites and relaunch them on Facebook and Twitter.

Unfortunately, the infamous fake news also appear on the same social networks, in this case not written by professional journalists of the printed papers, radio, television or web but launched online by “characters” who improvise themselves as “news providers”. And sometimes, especially for the younger ones, it is difficult to distinguish between fantasy and reality. Better to rely on old and healthy paper. With that, you go on the safe side.