The constituency of Newmarket‒Aurora is situated in the Regional Municipality of York between the districts of Markham‒Stouffville to the east and King‒Vaughan to the west. It encompasses the Town of Newmarket and the northern portion of the Town of Aurora. 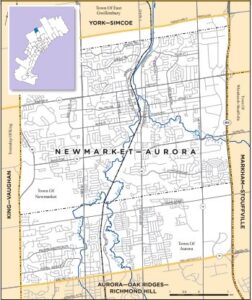 Notably, the area is home to auto parts powerhouse Magna International Inc., located in Aurora. It is also considered a most desirable place to live and work.

Immigrants make up a considerable portion to the riding’s population, primarily those of British origin. In terms of Europeans, 12,020 residents self-identify as Italian Canadian (as per the 2016 Census). They are among the largest ethnic groups who originate from Europe and represent 10% of the district’s population. 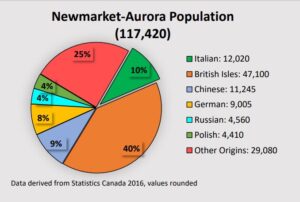 The constituency was created in 2007. The PC Party has dominated the political landscape, expect for the years between 2014 and 2018 when the Liberals held the seat for one term.

This time around, there is no incumbent in the riding because Christine Elliott chose not to run in this election. Instead, Dawn Gallagher Murphy is the PC candidate determined to hold the seat for the Party.

“From hardworking families to successful business owners, it’s the people who make Newmarket‒Aurora so special”, she told the Corriere. “They are among the most compassionate and determined people, making it clear that the Ontario Spirit is alive and well in our community”, she added.

Backing her Party’s message, she reiterated the five-point plan: rebuild the economy, work for workers, build key infrastructure, keep costs down and to keep Ontario open.

Meanwhile, candidate Denis Heng aims to garner more support for the NDP. He also echoed his Party’s message, “to build a recovery that puts people first”.

Another name on this year’s ballot is candidate Sylvain Roy. His focus is to build back support for the Liberals among electors. He did not respond to our request for input as at the time of going to print.

It may prove challenging to sway the minds of voters. According to the latest projections by 338Canada.com (May 9), the PC are in the lead at 41%. The prediction model uses algorithms and considers all major polls. It shows the Liberals at 36% followed by the NDP at 15%. 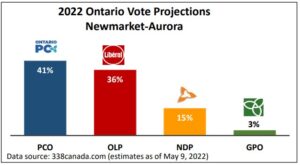