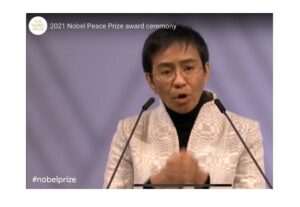 A Feel-Good Moment as We Enter the Third Year into This Pandemic. Last month, as Canada was hearing about omricon for the first time, I had a moment of pause from all the COVID 19 stories and reports which were unsettling. I was up at seven in the morning of December 10, 2021 to watch the 2021 Nobel Peace Prize ceremony in Oslo, Norway. Recipients of this award went jointly to Dmitry Muratov of Russia and Maria Ressa of the Philippines for “their efforts to safeguard freedom of expression which is a precondition for democracy and lasting peace”.

Awarded their prize on October 8th “for their courageous fight for freedom of expression” against their respective governments, both received their awards in person on the 10th, the death anniversary of Alfred Nobel, the Swede in whose honour the prize is named after.

As a Filipino-Canadian and a freelance journalist, I rejoiced over knowing that Filipino-American Ressa who lives in the Philippines, was a recipient of this award.

I first came to know the name Maria Ressa when she was reporting for CNN in the 80s. During the People Power Revolution in the Philippines in February 1986, she was the face and voice of CNN as events unfolded. Co-founding the digital news site Rappler in 2012, she was targeted by the Duterte administration for reporting the facts that make Rodrigo Duterte someone to avoid not only in the Philippines but within the international community.

In a December 10, 2021 New York Times guest essay she penned with Mark Thompson, a former chief executive of the New York Times Company, Maria Ressa describes the Philippines as a dangerous place for reporters, pointing out that since Duterte came into power, 22 journalists have been killed. Being a reporter in the Philippines can cost you your life, she wrote.

This brings me back to my visit to the camp of the New People’s Army (NPA) in 1987. I expressed interest in talking with the commander of Camarines Sur chapter and was guided into his hideout. The NPA was identified as a rebel organization during the Marcos era, referring to the 20-year-term of ousted ex Philippine President Ferdinand E. Marcos, and comprised of farmers and labourers. I wanted to know if they will still pursue their fight now that Marcos was in Hawaii in exile. The commander said, we want to wait and see how the present government (Cory Aquino’s) will address the country’s concerns and if they will listen to ours.

At the time, my family and friends in Bicol expressed concern over my plan to even step into the NPA camp, armed with only a pair of binoculars as a peace offering. The meeting ended on a cordial note, binoculars accepted, and I got to write about it in Balita where I was a contributing photo-journalist at the time.

Looking back, I felt lucky I wasn’t harassed or physically harmed, especially since I identified myself to be from Toronto and was there to make a piece about the NPA. Perhaps, they were more respectful of journalists then.

In accepting her prize, Maria Ressa gave a 10-minute speech wherein she mentioned eight fellow journalists harassed by the governments they were reporting of, including Jamal Khashoggi whose body was believed to have been dismembered inside a Saudi Consulate in Istanbul in 2018.

In the speech, she recalled how a recipient of the same prize in 1936 was not allowed to appear in person because he was languishing at the time in a Nazi concentration camp. The Nobel laureate was Carl Von Ossietsky. The 21st century is a time when journalists can be in peril as is her case. In less than 2 years, 10 charges have been filed against her by the Philippine government.

Since Duterte came into power, 23 Filipino journalists have been murdered, the 23rd occurring only within hours of her arrival in Oslo. Rappler has been under the Duterte radar since it demanded accountability of Duterte’s drug war and called the attention of Facebook for its fake news posts.

Counting 35 years of journalistic experience, Ressa expressed sadness over the role of her duly elected president in closing down ABS CBN news arm and the imprisonment of Leila de Lima, a senator who has been serving five years now for merely asking accountability on the drug wars. The Duterte administration has used the terminology “drug wars” to justify 20,000 the extra judicial killings that have been going on since 2016, the year Duterte assumed the presidency in the Philippines. In closing, she encouraged everyone listening to her speech “to create the world that we want, a world of peace, trust and empathy”.

I felt good watching her deliver her acceptance speech. While she touched on the perils in seeking the truth and holding power accountable, she expressed hope that her award and what it signifies will reach people living in countries with populist leaders who politicize and encourage fake news and present alternative facts.

In the pic, from YouTube, Maria Ressa speaks at the Nobel ceremony