Nothing can satisfy anti-catholics 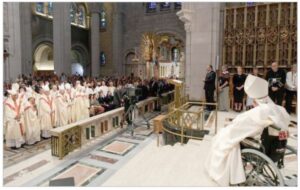 TORONTO – This penitential pilgrimage of the Pontifex Maximus, Pope Francis, is, for me, a classic example of an event grounded in the concept of wanting to “do what is right”. It manifests itself in the supreme patience of a very old man, personally suffering physical pain, assuming the weight of the harms (real and perceived) foisted on others by elements in the Church he leads in an era with which he had no personal attachment.

With occupancy in office comes accountability: to whom much is given much is expected. As an aside, the staff at the Corriere Canadese has been doing extraordinary work to reflect the moment in keeping with that ethic.

I have been equally impressed with most of the leadership in the Aboriginal an Indigenous community. Their tranquil serenity and “class act performance” attracts credit to their voices.

On a personal basis, I refer to some with whom I interacted in my past life, Willie Littlechild and Phil Fontaine. There are others of course, but these struck me “statesmen” (a gender-neutral term, with all due respect to one other former colleague, the Hon. Ethel Blondin) who worked for the attainment of the event and do not want to diminish its import with trite commentary encapsulated in the “but it is not enough” phraseology.

That crassness is best left to media types who feast on dissension and negativity. They are expert is the “bait and switch” and “gotcha” approach to reporting, even on serious social-cultural matters such as those foundational to this Penitential Pilgrimage, and to belittling the efforts of those involved.

Case in point, you wonder. How many readers had ever heard of the Papal Bulls? I had forgotten about them after my undergraduate studies in Medieval and Early Renaissance European History. I was a younger man then, eager to point fingers and find fault – even where none was merited.

Then the Rt. Honourable Paul Martin (Canada’s best Prime Minister ever, because he appointed me to Cabinet) in post retirement asked me what I thought of them. Not much, I replied, “were they not rescinded in [1537]?”

For good measure, I made a superficial observation that they had been intended as a ‘peace keeping’ effort among the European Powers. Given that Europeans were no strangers to raping, burning and pillaging as instruments or consequences of war, recognizing the ‘moral authority’ of a third-party institution (the Universal Church) seemed to be a monumental step forward – a little like placing faith in the United Nations General Assembly today.

Alas, I added, it did not last long. The Protestant Reformation, the riches discovered elsewhere (among other places in the Americas) and advancements in warfare technology soon put an end to those pretensions.

Now some “bright lights” want to raise the issue once again by demanding that this Pope rescind what had already been revoked almost 500 years ago. In my humble opinion, it smacks more of giving oxygen to the blatant anti-Catholicism of the woke counter-culture movement, than a genuine desire to contribute to the Penitence and Reconciliation the Pontiff’s pilgrimage is intended to generate. The bishops who feed into that narrative should be embarrassed for raising the matter. 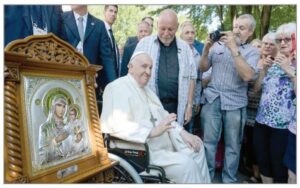