Ontario: 46 deaths and 505 in intensive care. Quebec, another 52 victims 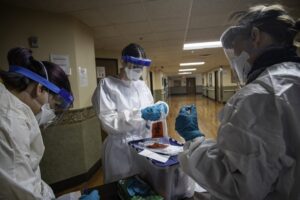 TORONTO – 46 dead and 505 people hospitalized in intensive care for Covid-19: scary numbers, those of today in Ontario where there are now 3,448 positive patients in hospitals, over 200 more than 24 hours earlier.

It is true that, as already reported yesterday by provincial health officials, 54% of hospitalizations concern people who ended up in hospital mainly for Covid-19 while the remaining 46% were hospitalized for other reasons and then tested positive for the virus, but in the intensive care 83% of patients are there for the virus and only 17% tested positive after ending up in the ICU for other pathologies.

For the record, we also report the number of new cases in Ontario, 9,782 (with a positive test rate of 20%), but we reiterate that it is an unreliable number due to the restrictions on tests that are now carried out only on categories “a risk”.

In particular, in the Greater Toronto Area, 1,675 new cases were recorded today in Toronto, 1,060 in the Peel region, 964 in the York region, 819 in the Durham region and 434 in the Halton region. Additionally, 471 new cases were reported in the Waterloo region and 588 in Ottawa. By now the virus affects everyone without distinction, “immunized” or not: of today’s cases, 1,347 involve unvaccinated people, 327 involve partially vaccinated people while 7,673 cases were detected in people with two doses of a vaccine and the other 435 in people with an unknown vaccination status.

With 46 deaths today, the total death toll in Ontario since the beginning of the pandemic is 10,445. The active cases (the known ones) are instead 132,188.

Impressive numbers also in Quebec where today the deaths were 52, bringing the total, since the beginning of the pandemic, in the province, to 12,080.

Another sharp increase in hospitalizations has also been recorded: another 457 people were hospitalized today and now the total number of patients in Quebec hospitals is 2,877. The province could exceed 3,000 hospitalizations already tomorrow if the current trend continues: this would be in line with projections published last week by the Quebec Health Institute (INESSS), which had suggested an explosion of hospitalizations due to the Omicron variant. For now, intensive care employment remains lower than the institute’s forecast (400): there were 263 patients in intensive care today, with an overall increase of 8 hospitalizations (41 people entered and 33 were discharged).

As for the cases, today the province registered 8,351 but the same is true for Ontario: the figure does not correspond to the reality of the facts. What is certain (and comforting) is that the positivity rate drops: following the analysis of 38,331 tests, the rate is at 16.6%, against the 31.2% recorded on 6 January on the basis of 56,147 tests.