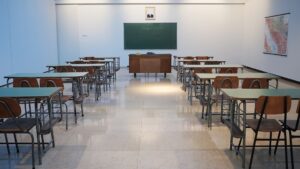 TORONTO – The countdown has started for the students of Ontario, who will return to class as early as next week. From January 3 the return had been postponed by the government to January 5 and then again postponed January 17 due to the rapid spread of the variant of Covid Omicron. But this time, according to government sources, elementary and high school children will return to classrooms.

The plan to resume face-to-face learning after two weeks of remote classes comes in the wake of the Canadian Pediatric Society, the Pediatrics Section of the Ontario Medical Association and the Pediatricians Alliance of Ontario who wrote an open letter to Ford in recent days urging him to reopen schools.

But if on the one hand the decision can only make happy parents who are questioning the validity of distance learning, on the other many teachers wonder what the government has done with regard to the safety of students at a time when infections, hospitalizations and intensive care are skyrocketing.

Teachers’ unions have called for a number of safety measures, such as N95 masks for education workers, HEPA filters in all classrooms, and the availability of rapid antigen tests. Opposition leaders have also criticized the government for not investing in security measures earlier. “Not reporting cases in our schools and kindergartens is dangerous. Doug Ford must end his Covid cover-up, put tests in nurseries, create a rapid testing program in schools and make PCR testing free and accessible to all families with children in schools,” liberal leader Steven Del Duca said. “Doug Ford had a month to implement safety measures while the children were not going to school. But he didn’t. Now we are at the same point,” said NDP leader Andrea Horwath.

Elementary Teachers Federation of Ontario (ETFO) president Karen Brown has criticized the government for moving forward with a resumption of face-to-face teaching at a time when Covid-19 continues to spread widely and access to testing for school-age children and school staff is limited. “We want to go back to classroom classes as much as parents but we want to do it safely and this has not been guaranteed to us – said Brown – what has the government done to ensure that attendance is not interrupted? What is it doing to solve the staff shortage?”

Brown is echoed by ontario School Teachers’ Federation president Karen Littlewood, who did not hide that she was “surprised” by the decision. “I don’t think that’s how we should be informed about the return to classroom classes,” Littlewood said. And then it is not allowed to have lunch in a restaurant right now but students can do it in a classroom at lunchtime or in a cafeteria”.

A “sudden” decision, this one of the government according to Littlewood while Ford initially hinted that the government would reassess the situation at the end of the two-week period. “I don’t know what they’re re-evaluating because if I’m not mistaken, the numbers of ICU admissions are rising and not falling,” Littlewood added, “so what is the yardstick the government is using to make this kind of decision? We want to go back to the classroom but schools need to be safe. And are they? That’s my question to the government.”

Meanwhile, the province said an agreement with the Ontario Teachers’ Federation will allow retired teachers to be reemployed into the public school system, not for 50 but for 95 days until the end of June.

Tomorrow a press conference is scheduled by the Minister of Education Stephen Lecce who, like Ford, has remained away from the spotlight for a long time. We are all ears.