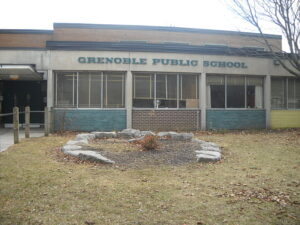 TORONTO – The number of Ontario schools closed due to the Covid-19 outbreak has reached double digits for the first time since the beginning of this school year. Following the decision to transfer the students of Grenoble Public School, which is located in the Flemingdon Park neighborhood, to distance learning as of today, 10 schools in Ontario are now closed. The decision to suspend face-to-face classes was taken after at least 15 students tested positive for the virus within a few days.

The wave of school closures occurred following a recent increase in laboratory-confirmed infections among students and public school staff, outpacing the increase observed in the wider community.

The number of active cases associated with the public school system has increased by almost 22% week-over-week and now stands at 1,357. By way of comparison, the load of active infections in Ontario has risen by only 14% in the same time period.

At the moment, in addition to the 10 schools closed, there are 647 those where at least one Covid-19 infection has been reported: meanwhile, the total number of cases since the beginning of the school year has risen to 6,624.

The number of infections reported by publicly funded school departments has steadily declined for most of October, but has now been on the rise for weeks. The 277 cases reported today are, in fact, the second highest number recorded since classes resumed at the beginning of September.

This trend also indicates an acceleration in case growth that is now surpassing what happened in Ontario schools over the same period during the 2020-2021 school year, when the second wave of the pandemic was underway.

Over the past week, Ontario schools have reported an average of 107.8 new student and teacher infections each day. But at this time last year the seven-day moving average was only 88. There were also only four school closures at this point in the 2020-2021 school year, although by the December holidays the number had skyrocketed to 22.

Faced with a situation that is not at all rosy, hope is now answered in vaccines for children aged 5 to 11 years. The hope is that the widespread vaccination of younger children will help protect schools in the coming winter months and allow Ontario to avoid the closure of schools throughout the province as happened after the Christmas holidays last year.

“With a high rate of vaccinations we can reduce the number of cases – said the Minister of Education Stephen Lecce – they have been a very effective tool to reduce infections and in our high schools we have one of the highest vaccination rates in the country and one of the lowest infection rates”.