Ontario, Education Minister on a War-Footing 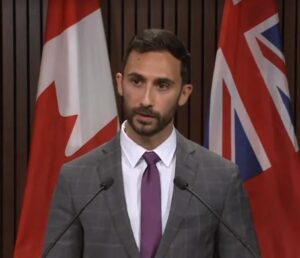 TORONTO – Give him credit for communications acumen in times of “crisis”. Facing a breakdown in negotiations with education workers and teachers, Minister of Education, Stephen Lecce, decided to take his message directly to an audience most sensitive in the event of a “job action”. Parents and grandparents of schoolchildren from family-oriented ethnic communities.

Lecce took his case to a captive audience of journalists and publishers from the National Ethnic Press and Media Council of Canada (NEPMCC) at its monthly meeting on Monday, October 17. If his intention were to reach out to media that most directly speaks to that demographic, he could not have constructed a better opportunity to state the government’s case.

The substance of his (the government’s) position did not change but his tone was designed to demonstrate that he “meant business”.

Maybe that was the entire purpose of the exercise. Whatever the reason, he benefited from the absence of any contrasting views from either the unions representing the other side of the negotiations or partisan positions in the provincial legislature.

He did entertain questions from the NEPMCC membership present. He stayed on message: the Unions, CUPE for education [support staff] workers, and teachers (OSSTF, OECTA etc.) are the only real threat to a return to normalcy in the school system.

Their demands are exaggerated and unwarranted, he claimed. Ontario teachers are among the best recompensed in Canada, if not North America, earning on average over $100,000 per annum and enjoying generous benefits, including an enviable pension plan and sick day package. A demand to go beyond a reasonable 1%-2% on top of that might be considered by other members of the labour market – including parents – to be a little much, he argued.

To reinforce that concept, he stated (more than once) that the package being presented as fair by the CUPE locals represented close to a 50% increase over current levels of wage packages. It did not hurt his premise when he grudgingly admitted that their request of 8.5% increase (all factors considered) over the four-year mandate of his government is what leads to the 50% indicator. It is all in how the totals are reached, but he was the one in charge of the narrative.

His job was to outline the government position; ours to report it and provide the framework for a counter position. Should a desire to express one arise from interested parties.

Lecce also outlined two other related initiatives: staffing and “housing” – the construction and upgrading of school buildings. The numbers, he claimed, are reaching historic levels.

He is right; but both are tied to a formula already built into the education financing structure: more students = more dollars in Grants for Student Needs (GSN) = more money for construction and facilities maintenance (20% of GSN) = more dollars for educational and support staff.

Members of NEPMCC represent 22% of the Canadian population, as of the 2016 Census, probably significantly more as of the 2021 Census. Lecce deserves full marks for recognizing that reality. The Opposition parties and the Education Industry Unions may not be aware of that fact.

If they are, they are deliberately avoiding their obligation to deliver a message directly to that segment of the population. Agree with him or not, Lecce obviously knows and is acting accordingly.