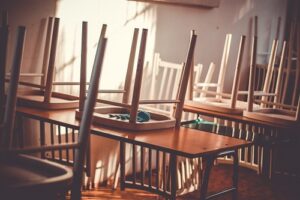 TORONTO – Government and Canadian Union of Public Employees (CUPE) are at loggerheads. The countdown has begun and in the event of no agreement, non-teaching staff who have been members of the union Friday could go on strike. Just yesterday the CUPE gave five days‘ notice in view of a possible complete abstention from work. “We believe that the next 3 days of mediation – November 1, 2 and 3 – are an opportunity for this government to come to the table to negotiate a contract that recognizes the education workers and vital services we provide to students, families and our communities,” CUPE tweeted.

In the meantime, although it is not known at the moment what will happen, some school boards of the province have already announced that in the event of a strike starting Friday, their school buildings will remain closed. “To ensure the health, well-being and safety of our students and staff, in the event of a complete suspension of services by CUPE all TCDSB schools will be closed beginning Friday, November 4,” reads an email sent to Director of Education Brendan Browne and school trustees by the Chief of Communications & Government Relations of the Toronto Catholic Disctrict School Board Shazia.  Vlahos. Of the same opinion are the Kawartha Pine Ridge District and the Peterborough Victoria Northumberland and Clarington (PVNC) Catholic District School Board.

At this point only the achievement of an agreement in extremis could avert the strike that is taking shape every day. The 55,000 workers who include guardians, early childhood educators, educational assistants and school administrative staff on the province’s Catholic, English and French public school councils have been out of contract since Aug. 31. And its renewal, despite the negotiations started in July, has not been possible so far due to the far divergent positions between the government and the union, especially with regard to the increase in payroll. Among other things, CUPE wants an annual salary increase of $3.25 per hour (11.7%), early childhood educators in every kindergarten class, five additional paid days before the start of the school year, 30 minutes of paid daily preparation, an increase in overtime pay, and a $100 million investment in creating new jobs.

The Ford government, meanwhile, has proposed a four-year deal that includes a 2% annual increase for workers earning less than $40,000 and a 1.25% annual wage increase for those earning more.

Tomorrow, the two sides are expected to return to negotiations in the hope of breaking the deadlock. “We are here to get a negotiated agreement that meets the needs of students and frontline workers. No one wants to strike, least of all the low-paid education workers who can barely make ends meet,” said Laura Walton, president of the Ontario School Boards Council of Unions, “despite this, we need a significant wage increase that we deserve. Students and parents are entitled to guarantees of better levels of service and staff in schools. Doug Ford is the premier of Canada’s richest province and clearly has the power and resources to accept our reasonable, feasible and absolutely necessary proposals.”

Calling the strike notice an “unfortunate decision” by CUPE, Education Minister Stephen Lecce said the province would work to reach an agreement. “For the sake of students and parents, we do not give up on an agreement that protects face-to-face learning for children, after two years of interruptions – said Lecce – we are at the negotiating table with a fair offer that includes a salary increase, benefits and a pension package among the most generous. This union puts its own interests before children’s, we’re going to make sure Ontario students stay in the classroom.