Ontario, even more powers to mayors to build houses 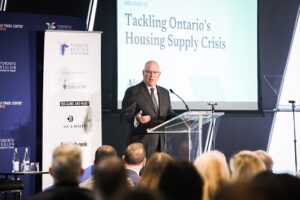 TORONTO – The Ontario government’s legislative activity continues aimed at making the priority of the Province more easily implemented: to build 1.5 million new homes over the next 10 years.

To this end, the Ontario government has now introduced the Better Municipal Governance Act 2022 – published yesterday on the government’s website: read it here – which, if passed, would not only further implement the “new powers” given to Toronto and Ottawa mayors (as previously announced by the Province), but would extend them to more municipalities in Ontario, especially those with rapid growth.

To identify them, the Province will use “facilitators” who will be responsible for carrying out a series of evaluations with the regional governments of Durham, Halton, Niagara, Peel, Waterloo and York, working with them to evaluate the best mix of roles and responsibilities between upper and lower tier municipalities and to ensure they are equipped to deliver on the government’s commitment to address the housing supply crisis.

The proposed legislation would also allow the Minister of Municipal Affairs and Housing to appoint the regional presidents of Niagara, Peel and York regions for the council’s current term. If these proposals are approved, the minister intends to reconfirm the current regional presidents: Jim Bradley in Niagara, Nando Iannicca in Peel and Wayne Emerson in York. This approach will offer continuity and stability at the regional level while the “facilitators” will consider the best way to add the “strong powers” of mayor to the identified Municipalities.

The proposed legislation would also implement additional changes to allow the mayors of Toronto and Ottawa to propose certain municipal statutes related to provincial priorities and allow the council to pass these statutes with more than one-third of council members voting in favor. In fact, the minority will suffice.

“These bold actions are necessary if our government is to deliver on its commitment to Ontarians and remove the obstacles standing in the way of delivering much-needed housing,” said Steve Clark, Minister of Municipal Affairs and Housing (in the pic above, from Twitter – @fordnation). “That’s why we’re again taking decisive action to equip municipal leaders with the tools they need to begin future population growth and get more homes built faster”.

These changes are the latest in a series of measures Ontario is taking to address the acute housing shortage in the province, such as the More Homes Built Faster Act, Strong Mayors, Building Homes Act and previous action plans for the provision of housing.

“The provincial government’s announcement is a positive step toward reforming local government in a way that addresses the concerns of Mississaugans,” said Bonnie Crombie, Mayor of Mississauga. “I am confident that this assessment will create a path for Mississauga’s independence and lead to greater equity and less red tape for residents and businesses so that both the City and Province can plan for future growth and support the Province’s goal itself to build 120,000 new homes in Mississauga over the next decade”.

“Redundancy is the enemy of productivity” said Patrick Brown, mayor of Brampton. “I am delighted that the provincial government is looking at ways to make Peel Townships more efficient. This will help address the challenges of growth and support the construction of the homes Brampton residents desperately need”.