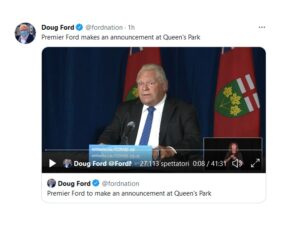 TORONTO – In the end, Ontario Premier Ford also won his reluctance toward the vaccine passport. Starting from September 22, going to the gym, going to the cinema or dining in a restaurant will require a certificate proving that you are fully vaccinated against Covid-19.

As part of the government’s vaccine certification program, all residents of the province will need to prove that they have received, at least 14 days in advance, both doses of an approved vaccine, in order to eat inside restaurants, train in fitness centres, attend nightclubs, movie theaters, theaters, strip clubs and casinos, as well as attend concerts, sporting events and to take part in other large gatherings organized indoors.

That after so many no to the green pass, Ford has partially and reluctantly yielded – the list does not include, for example, the PSWs who work in nursing homes and rest homes or restaurant staff – is clear. A vaccination passport will also not be required to shop at retail and eat outdoors, or to attend workplaces, religious services and other essential activities, including grocery stores, pharmacies and banks. “It is a temporary measure, it will remain in force only for as long as necessary”, specified the premier who during the press conference twice attacked Prime Minister Trudeau “who instead of preparing a vaccine passport valid throughout Canada has thought of calling an unnecessary election”. “As the world continues its fight against the Delta variant, our government will continue to do what is necessary to protect people, protect our hospitals and minimize business disruptions based on the latest evidence and best recommendations, vaccination certificates give us the best chance of slowing the spread of this virus by helping us avoid further lockdowns. If you have not yet received the first or second dose of the Covid-19 vaccine, do it today.”

Exemptions will be granted, Ford said, to those who cannot be vaccinated for medical reasons and to children under the age of 11 who currently cannot be vaccinated in Ontario.
Chief Medical Officer of Health of Ontario Kieran Moore is defending the list of facilities where the vaccination pass will be needed: “The places we have chosen respond to the risk we have seen in Ontario – he said – if the risk increases elsewhere we can add and implement further measures to protect the inhabitants of the province”.

Provided they test negative for a Covid-19 test done 48 hours earlier, from September 22 to October 12, unvaccinated individuals will receive a temporary exemption to attend funerals or wedding receptions in meeting and event spaces.

To prove they are fully immunized, Ontario residents must use the paper or PDF vaccine receipt available online, along with a photo ID, but the province said an app and QR code system are currently under development. According to officials, people will be provided with a unique QR code that contains information about their vaccination status, and an app will be developed to allow companies to read that code. “The province will migrate to the QR code system by October 22 and will be compatible with systems used by other provinces and the federal government,” Health Minister Christine Elliott said.

The fines, which will be imposed on those who do not comply with the program under the Reopening Ontario Act, will be about $750, in the case of a company even more than $1,000.