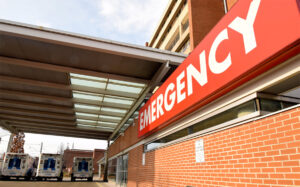 TORONTO – “Crisis is the right word.” Joining the chorus of doctors and nurses sounding the alarm is Ontario Health Vice President Chris Simpson. The growing pressure on the province’s health system is not the result of fantasy but a sad reality even if the Ford government continues to deny the evidence minimizing the seriousness of the situation.

“The health care sector is under pressure and a worsening that I think, we all feel, is tangible – said Simpson – to say that there is a crisis is to describe with a single word the situation in our hospitals”.

Many of his long-time colleagues, Simpson says, referring to the burden on the health care system say they’ve never seen anything like it in their careers. “We cannot really describe in words the extreme pressure to which the system is subjected – he said – the pandemic was somehow the straw that broke the camel’s back, it highlighted problems that have been present in the sector for many, many years”.

In recent months, a shortage of staff has been reported in hospitals in the province, resulting in the temporary closure of emergency rooms and intensive care units that operate at the limit of their possibility or are dangerously close to them. “We’re at a point right now, where I think everyone feels the difficulties really intensely and if the system still works, frankly, it’s thanks to the extremely hard work and professionalism of workers and leaders in hospitals and other health organizations across the province,” Simpson said.

The vice president of Ontario Health also said that “Ontario residents continue to have access to the care they need when they need it” but that “we can always strive to do better.” There is a real need to do better if you think that nine out of 10 patients who visit Ontario’s emergency rooms for urgent care complete the visit within eight hours.

And Toronto’s hospitals are the ones where waiting times for those in need of hospitalization are the worst in the province. Only 10% of patients admitted to the Toronto General emergency room finished the visit within an eight-hour time frame. At Toronto Western and Michael Garron Hospital the percentage is slightly higher, 11%, while it is 16% at St. Joseph’s and 22% at St. Michael’s.

In addition to staff burnout, after more than two years of overwork due to the Covid pandemic, there are a number of factors, such as capacity, a greater number of patients who present themselves to emergency rooms and those who have contracted Covid-19 in severe form.