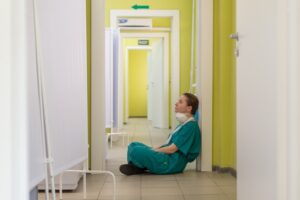 TORONTO – For the first time in more than a month, the number of Covid-19 patients in Ontario’s intensive care units has exceeded 200: to be precise, 202 patients of whom almost half (91) are breathing with assistance of a fan. It is the highest number of people in intensive care with Covid-19 since last March 16. And it should also be considered that the admissions data are probably underestimated as some hospitals generally do not report the number of beds occupied during the weekend.

In total, 1,301 infected people were held in hospitals today, an increase of 19% compared to the same day last week. After all, just a few days ago the Ontario Science Advisory Table had predicted that hospitalizations will continue to increase until May and, in the most likely scenario, the number of people hospitalized with Covid-19 will reach a peak of about 3,000, of of which about 500 in intensive care. In January, there were more than 4,000 people with Covid-19 in Ontario hospitals: the number of people in intensive care peaked at 626 on January 18.

Wastewater surveillance data increasingly suggests that transmission in the could stabilize at around 100,000 new cases per day, hospitalizations are considered an “indicator of delay” and could continue to increase in the near future. “If we look at the surveillance of wastewater, the data shows the first signs that transmission is stabilizing or declining in many parts of the province. This is obviously a very positive sign “, Dr. Isaac Bogoch, infectious disease specialist, told CP24, adding however that “we must always be careful, You cannot have blind faith in the era of Covid-19, but at least there are some signals that things are starting to improve in Ontario”.

As for infections, 4,669 cases have been confirmed in the laboratory in the last 48 hours, based on 20,511 tests, with a positivity rate of 19.5% on Saturday and 18.7% on Sunday. The active and known cases, officially, are now 35,500 against the 33,432 of last Thursday: therefore increasing, even if the numbers do not represent the reality of the facts as they are based only on tests reserved for “at risk” categories.

From Saturday to today, another 3 deaths were reported, bringing the death toll in the province, since the beginning of the pandemic, to 12,632.