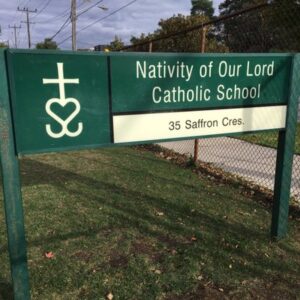 TORONTO – Covid-19 has started to run again. The number of active cases of Covid-19 associated with Ontario’s public schools has reached 1,006 for the first time since October 29. Since the beginning of the school year, the infections are a total of 5,626. By this time, during the 2020-2021 school year, there had been only 3,387 confirmed cases among students and school staff.

From the data of the Ministry of Education it appears that in the last twenty-four years another 86 new cases of the virus have been reported (77 students and 9 teachers) compared to 85 in the same period last week. But the school, moreover, is not a separate entity from the rest of the community and the rapid rise of infections in the latter inevitably translates into an increase in infections among children and school staff.

While the institutes in the province that have reported at least one case are 488, the number of schools closed due to Covid outbreaks rises to four. Last, in order of time, is the Nativity of Our Lord Catholic School located in Saffron Crescent in Etobicoke, which yesterday did not reopen: the cases identified in the elementary school since last week are at least 18, eight of which were detected on Friday. Since yesterday, children have been taking online lessons. And as the Nativity of Our Lord closes, the Precious Blood Catholic School, which was forced to suspend face-to-face classes on November 9 following an outbreak of the virus, reopens today.

Instead, Our Lady of Fatima CES, which is part of the York Catholic District School Board, is expected to reopen on November 22. Closed since yesterday due to an outbreak of the virus – the cases discovered are currently ten – is also the EEC René Lamoureux in Mississauga.
Toronto Mayor John Tory is also concerned about the surge in cases among boys: “The city will remain focused on increasing vaccination rates as a first, second and third priority,” he said.

To that end, he said he hoped Health Canada would soon approve the Covid-19 vaccine for use in children aged 5 to 11, paving the way for the launch of a major campaign to vaccinate school-age children. “We hoped that the approval would come soon so that we can start with vaccinations as early as next week – said the mayor – we still know that it will come soon, so I hope that by the beginning of December we will be able to do it”.

Pfizer-BioNTech’s Covid-19 vaccine for children aged 5 to 11 years should be approved by Health Canada within one to two weeks.

At the moment there are at least 125 groups of boys in self-isolation in the GTHA, compared to 98 a week ago. A number, this, that probably does not photograph reality well as a number of important school boards do not make these data public. It is not known, therefore, how many students have actually switched to distance learning.