Ontario, many cases of Covid-19 among children under 12 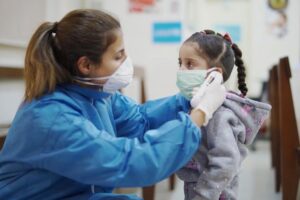 TORONTO – Contagions slightly down, but still above 700. Ontario seems to “hold up” and the impression that emerges from reading the latest data is that if everyone were vaccinated, the number of new cases would probably be much lower. Let’s see why.

Today, 784 new Covid-19 infections (and 6 deaths) were recorded in Ontario, marking the fourth consecutive day with daily cases over 700. Today’s new cases represent a slight decrease from 857 infections on Saturday, 848 on Friday and 798 on Thursday, but, with just over 23,600 tests processed in the last 24 hours, the provincial positive rate remains quite high: 3.2%. The seven-day moving average of daily infections is now 712, down from 746 last week.

Well, of the 784 cases reported today, 602 were found in people who were not fully vaccinated or who had an unknown vaccination status. 40 of the new infections on Sunday were found in children under the age of four, 100 in children between the ages of 5 and 11, and 83 cases in boys between the ages of 12 and 17. Most new infections were found in individuals aged 20 to 39 with 217 cases and aged 40 to 59 with 155 cases. 76 cases involving people aged between 60 and 70 years, while only 14 cases in the elderly over the age of 80. In the pre-vaccine pandemic, the situation was practically reversed: it was mainly the elderly who fell ill but now are almost all vaccinated, so the virus currently appears to be spreading more among children under 12 – none of whom are vaccinated – and among young people and adults, particularly those who are not vaccinated.

The vaccination campaign, however, continues: 84.3% of eligible residents 12 years of age and older received one dose, while 78% received both doses. According to health officials, increasing Ontario’s vaccination rate to 90% will help curb the spread of the Delta variant, which is primarily responsible for the spread of the virus: of the 784 cases reported today, as many as 507 are attributable to the Delta variant.

On the hospitalization front, 184 people are hospitalized in Ontario’s intensive care units: 107 of these patients breathe with the assistance of a ventilator.

About the territorial distribution of today’s cases, 147 were registered in Toronto, 73 in Windsor-Essex, 67 in the Peel region and 65 in the York region. Other municipalities that have reported more than twenty new cases are Ottawa (57), Hamilton (57), Niagara (45), Durham (42), Simcoe-Muskoka (37), Halton (29) and Middlesex-London (22).

In Quebec, 757 people tested positive today: 510 were not vaccinated, 60 received one dose more than two weeks ago, and 187 received two more than a week ago. Positive cases were detected on 24,107 samples analyzed, which means that the positivity rate was 3.4%. No new deaths were reported.

Quebec hospitals received 17 new patients (eight unvaccinated, two with a dose received more than two weeks ago and seven with the double vaccine for more than a week). A total of 213 patients are hospitalized in Quebec, five fewer than on Saturday. Of these, 75 people are in intensive care units, the same number on Saturdays. On the vaccine front, 88% have received a vaccination and 81% are fully vaccinated.