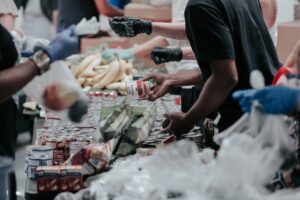 TORONTO – More and more people in Ontario are turning to food banks, according to a new report by Feed Ontario, a collective of 1,200 food banks affiliated with other organizations addressing food insecurity.

The annual “Hunger Report,” subtitled “The Deepening Cracks in Ontario’s Economic Foundation,” found that 587,000 adults and children (the latter accounting for 30 percent of the total) visited the province’s food banks — for a total of 4, 3 million times – between 1 April 2021 and 31 March 2022.

“This is the largest amount of people accessing our services ever since we began collecting data” Feed Ontario Executive Director Carolyn Stewart said in an interview. “There is concern that donations won’t be enough to meet the need, that we won’t have enough food resources for this ever-increasing need of the people” added Stewart who attributes the ‘spike’ to long-standing issues such as precarious work, inaccessible aid to unemployment, inadequate support for people with disabilities, but also more recent ones such as the inflation and the increase in the cost of living with particular reference to housing with unaffordable prices.

Those who have visited food banks in the past two years have cited food and housing costs, low wages or insufficient working hours as problems among their problems. “Imagine you’re already on a tight budget: You’re scrambling to get a roof over your head or keep the lights on, buy winter clothes for your kids or pay for much-needed medication” Stewart said, noting that those who turn to food banks are faced with such dilemmas every day.

Stewart also pointed out that food banks are now being asked to play a role they were never designed to play. “Our organizations were set up as an ‘interim measure’ in the 1980s and were never meant to be a social safety net. People had to come to us in times of extreme emergency. Ontario are unable to afford basic necessities, how far will our emergency network be sufficient?”.

Feed Ontario therefore asks the provincial government to address the problems that have led to this situation as soon as possible, focusing on three objectives in particular: “increase the quality of work, invest in government-assisted housing and improve social assistance” .

Photo by Joel Muniz from Unsplash