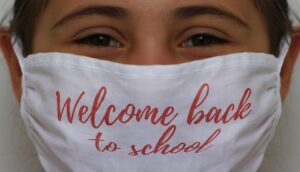 TORONTO – Infections are rising and schools are closing. As expected, the return to school is not spinning as smooth as oil. Today the school boards of the province reported 286 active cases of Covid, an increase of 97% compared to the day before while entire classes were given the order to stay at home in quarantine.

Covid-19 continues to be the held and increasingly hated virus by the students who just put one foot in the classroom, in ever greater numbers, are forced to return again within the four walls of the house.

Goodbye classmates, goodbye intervals to play in the yard, goodbye laughter and chatter on the way home. Everyone – from the Ministry of Education to the Chief Medical Officer of Health of Ontario through the various virologists – everyone tried to convince, in addition to themselves, parents and students that this time it would be different. That this beginning of the school year would take place under the best auspices, that the situation would be under control. That was not the case. Across the Greater Toronto and Hamilton Area (GTHA), school boards reported 109 infections today compared to 74 the day before. The Toronto District School Board reported 25 cases in 24 different schools.

The second highest number in the GTHA was found in Peel, where the Dufferin-Peel Catholic District School Board said that there are now 16 confirmed or probable cases of Covid-19 in its schools. And in Hamilton, where the Catholic superintendent reported 11 cases, 13-class boys were forced to stay at home in self-isolation. In the rest of Ontario, between Monday and Tuesday the number of active cases rose from 115 to 177.

To make a comparison with the last school year, it is noted that at this point the infections between staff and students in Toronto and Peel, had been a total of 29. Today the total infections of the province linked to schools represented 4.6%.

There are also more and more school boards in the province that in an attempt to contain the spread of infection in schools are not thinking twice about ordering quarantine to entire classes or groups of students.

Meanwhile, Isaac Bogoch, an infectious disease specialist at UHN, said that Covid-19 cases occurring in schools should not surprise anyone, especially since the case count has been steadily increasing since July. “We know that the virus is present in schools, but we don’t know to what extent it is transmitted in educational institutions,” he said.

However, the provincial online portal dedicated to the trend of Covid-19 cases in schools is still inactive: officials have committed to making it worksoon.